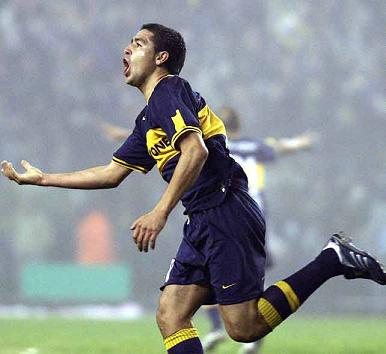 Trailing 3-1 from the first leg, Boca played Cúcuta in the semi-final second leg of the Copa Libertadores on Thursday night. It was never going to be easy, but a Riquelme-inspired display saw them run out 3-0 winners on the night, in horrendous fog, to book their place in the final.

Kick off was delayed by nearly 50 minutes as fog drifted in from the Río de la Plata to engulf the stands and pitch, and when the match did begin the TV cameras could barely make out the pitch. During the first half, both sides hit the crossbar but Boca began to impose themselves, and a minute before the break found the way through – thanks to that man, Juan Román Riquelme. JRR curled a superb free kick over the wall and into the top corner to put the hosts in with a chance as they went into the dressing rooms.

In the second half, Boca went out with all guns blazing, forcing not one, not two, but three cracking saves from visiting goalie Robinson Zapata in the first few minutes of the half. Thereafter, the game was broken up by the referee and his assistants periodically halting play to discuss whether it was possible to carry on amidst the fog, but each time the decision was ‘yes’. The first such talk came after Boca had had a goal ruled out – seemingly incorrectly – for offside. How the linesman could see who was where is anyone’s guess, especially since Boca (predominantly navy) were playing a side also wearing a dark kit.

Thereafter, though, Boca weathered the storm. Martín Palermo did what he does best, throwing himself in where others fear to tread with a far post header from a corner to level the aggregate score. Cúcuta had some dangerous breakaways but Boca made almost sure of things when Sebastián Battaglia headed home powerfully from a Riquelme corner to make it 3-0 on the night. In stoppage time, Lionard Pajoy was clattered by Mauricio Caranta but Boca escaped the muted penalty appeals.

The final of the 2007 Copa Libertadores, then, will be Boca Juniors vs. Grêmio do Porto Alegre. The first leg will be played in La Bombonera next Wednesday, 13th of June. The second will be in Porto Alegre on the 20th. You know where to come for the team news beforehand.

For the videos of tonight’s goals, check back on Friday evening (UK time).

3 thoughts on “Bring on Gremio”