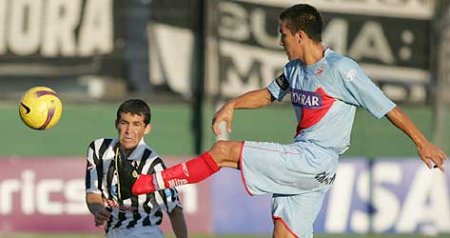 Arsenal de Sarandí played their first match in the Copa Libertadores proper on Wednesday evening. The task ahead of them was a tricky one: the visitors to El Viaducto were Paraguayan giants Libertad, who’ve made a habit of reaching the knockout stages in recent seasons. The result was better than expected and, perhaps, better than they’d even hoped for.

The Copa Sudamericana champions started well, creating four great chances in the opening twenty minutes, which visiting ‘keeper Horacio González excelled himself to keep out. As the half wore on, Libertad forward Roberto Gamarra began to look dangerous, and as more Arsenal chances went begging and both Sebastián Carrera and Javier Gandolfi had to go off injured, it looked more and more like it wasn’t to be the hosts’ night.

In the second half, though, they once again came out flying, pushing for the opening goal which, nonetheless, stubbornly refused to come – until eleven minutes from time, when Luciano Leguizamón stepped up and sent an exquisite free kick past goalkeeper González and in off the post. The match had nothing more to offer, but the home fans won’t mind too much – they’re off to a great start in their quest to qualify for the knockout rounds, having performed well and claimed three points from very difficult opponents.