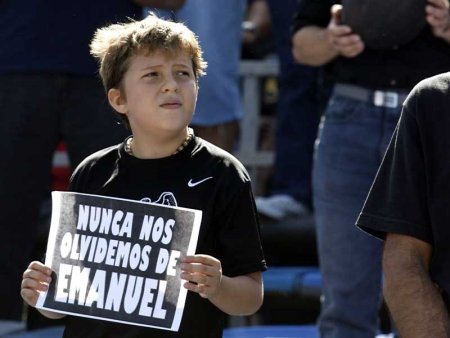 There was a summit meeting tinged with sadness in Liniers on Sunday afternoon, as Vélez Sársfield, top with 13 points but having lost a fan a week ago to the ongoing violence in the country’s footballing climate, hosted River Plate for the right to top the table as the first third of the 2008 Clausura was reached. It was also a clash between two of the last three unbeaten sides left in the competition (Boca Juniors are the other), and now the hosts have lost that record, as River moved to the top with a 2-0 win.

Prior to the match, there was a public tribute from the home fans to Emanuel Alvarez, the Vélez fan killed en route to his side’s match with San Lorenzo last weekend. The home fans wore black t-shirts and the players took to the pitch to loud applause from both sides with banners reading ‘Justice for Emanuel’. Before the match, there was a minute’s silence in tribute.

After that, though, the football had to get underway, and River’s goals came early, as they started out looking to pick Vélez off on the counter-attack. The hosts came forward and saw a couple of chances go begging before Chilean wunderkid Alexis Sánchez (pictured left, celebrating) pounced in the eighth minute, taking advantage of the moment’s lapse in concentration from his marker to latch onto the ball and produce a finish across the face of goal that went in at the far top corner. Two minutes later, Radamel Falco García arrived in the box to double the lead.

Ten minutes gone, and having been the more adventurous side in the opening stages, Vélez suddenly found themselves 2-0 down in front of their own fans. Their gameplan, at least, couldn’t change, and they just kept on attacking. They came unstuck, though, when they encountered the barrier that had been erected to fill River’s goal and keep the ball out of the net: Juan Pablo Carrizo was having an absolute stormer.

Without having the ball for anywhere near as much, River actually looked more dangerous in the first half as a whole. Vélez’s need to throw men forward from such an early stage created a lot of space for River’s forwards, but Mauro Rosales in particular missed a good chance to give the visitors a third. With Diego Buonanotte, Sánchez and Falcao all playing well in Ariel Ortega’s absence through injury, River were demonstrating that as well as being ruthlessly efficient in the early stages, they were also capable of playing a bit of football themselves as the half wore on.

Vélez banged the ball long in increasing desperation, and River’s defence coped easily until the break. In the second half, the hosts attacked with more men and more intelligently, whilst River seemed to lose their way when trying to bring the ball out. The defence, though, were rescued when they let the home side’s forwards slip through by Carrizo’s sterling performance in the net, and the clean sheet was assured. Prior to Boca’s match against Colón, River were top on their own with 15 points.