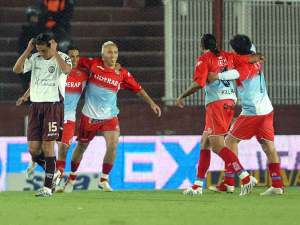 Arsenal de Sarandí, the winners of the most recent Copa Sudamericana, visited the current Argentine league champions Lanús on Friday night and got the thirteenth round of matches off to a cracking start, demolishing their hosts 6-2 to make Ramón Cabrero’s final campaign in charge of the Granate just a little bit worse. Cabrero, with his mind on the Copa Libertadores, rested the first team and put his subs out – and Lanús were punished for it as Arsenal claimed their second straight win.

Prior to Friday, Arsenal hadn’t won in four matches away from home, but they’d already put any doubts as to the outcome of this one out of their minds before the break in La Fortaleza, breaking down the home side’s defence to run into a 4-0 lead by half time. They were 2-0 up after just ten minutes thanks to strikes from Luciano Leguizamón and Pablo Garnier, who doubled his own account in the 25th minute before Leguizamón got his own second goal shortly before half time.

From the off, Lanús hit back after the break with goals from Leonardo Sigali and Nicolás Ramírez by the 55th minute pulling it back to 2-4, but Leonardo Biagini, in the 63rd minute, and Mario Cuenca with a 71st minute penalty made sure of both the result for Arsenal, and the humiliation for Lanús. The champions are now rock bottom of the Clausura table and have gone eight matches without a domestic win (three straight defeats). Uruguayan goalkeeper Claudio Flores has to take a fair bit of the blame, but his defence didn’t help him out one bit. Arsenal, meanwhile, are emerging from a bit of an on-pitch crisis in style. With Huracán winning Friday’s other match 1-0 over Gimnasia de Jujuy, we have nine goals from the first two games of the round. Let’s see how the rest of the weekend measures up…