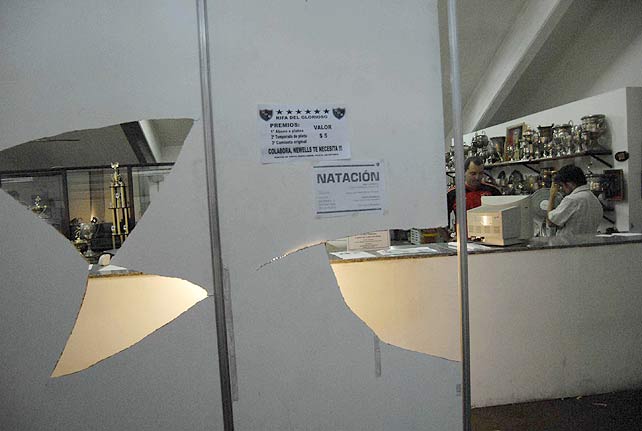 Newell’s Old Boys continue to be beset by problems created by their hooligan gang. On Monday a group of 25 – 30 barra bravas invaded the club’s premises – some carrying firearms – and threatened club members and staff who were present, destroying some of the fittings. The attack comes in the wake of the pre-Christmas presidential elections, the first in 14 years at the Rosario club, which were immediately followed by similar attacks after the incumbent Eduardo López was voted out.

The police in Rosario detained 21 suspects, with two minors among them, as well as impounding the two minibuses they arrived in and confiscating a nine milimetre pistol and numerous knives. The group had broken into the administrative HQ of the club seemingly to carry out acts of intimidation against staff and members gathered there to go through paperwork. They confronted the members who tried to stop them and destroyed several installations.

‘Everything happened very quickly,’ Pablo Javkin, the provincial deputy, told Rosario paper La Capital. ‘They came in swiftly and left just as suddenly.’ The incident only serves to underline the state of the club new president Guillermo Llorente has taken over. On taking charge he found the club’s finances deep in the red, without full administrative registers and with more than half of its installations and premises in a critical state.

The barras, who were given the run of the stadium and of the club’s facilities under the despotic presidency of López, are obviously trying to make things as difficult as possible for the new man. What’s the betting López is involved in some way?