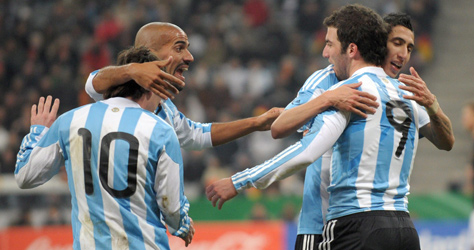 Diego Maradona’s last chance to give his players a proper test prior to the announcement of the provisional squad for the World Cup took place on Wednesday night and saw a dull match marked only by Gonzalo Higuaín’s second goal in his third match for his country. Martín Demichelis, playing at his home stadium in Munich, was stretchered from the pitch after a collision with Michael Ballack. He’ll need surgery, but will be fine by the time the World Cup comes around. Seba Verón started well but faded later, and Lionel Messi linked up well with Angel Di María and Higuaín at times. You can see the goal here.

Verón was praised early on by the Argentine press for his good management of the midfield, but towards the end of the match he faded. That being said he still had the only shot of the entire second half, with a free kick which Adler saved after two attempts. Messi was – as ever when he plays for his country – more isolated than he is for Barcelona. And – as ever when he plays for his country –  the press (with the exception of El Gráfico, who praised his work with Di María and Higuaín) were disappointed with him again.

The goal came on the stroke of half time when, following a headed clearance from the Argentine area Di María saw Higuaín rushing past his man and Adler in no man’s land. The Benfica wide man picked out Pipita with a well-weighted ball over the top and Adler was made to look like a fire engine racing to the wrong fire as Higuaín easily sidestepped him and slid the ball home from just outside the area. The second half saw Argentina forced to defend more and search out the counter attack, but they held on for the win.

Diego Maradona described it as ‘a true World Cup match’ for the ferocity of some of the challenges, including the accidental one which saw Michael Ballack fell Martín Demichelis. ‘Both sides left all their meat on the barbecue,’ as he put it. If nothing else, another goal from Higuaín should result in some stability for Argentina up front. The fact that Higuaín’s replacement was Carlos Tevez, rather than Diego Milito, suggests some ideas could still be a little clearer, but still, there’s promise in Maradona’s thinking.

3 thoughts on “Putting meat on the barbecue”