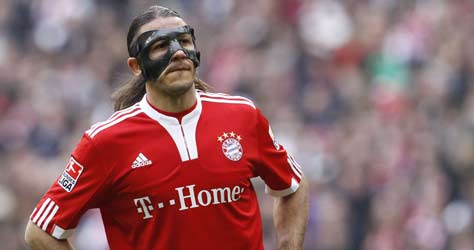 Lionel Messi had the weekend off, putting in a relatively quiet shift, but Gonzalo Higuaín scored again as Real Madrid kept up the pace in La Liga. Elsewhere two Argentines got their hands on the French League Cup, Martín Demichelis donned a face mask to return to action for Bayern München (he’ll be using it against Manchester United tonight as well), and Monday evening saw Carlos Tevez hit a hat trick for Manchester City. All this and more awaits…

Monday night’s Premier League match between Manchester City and Wigan Athletic at Eastlands was decided in the last 18 minutes as Carlos Tevez hit a hat trick, with his first goals coming just two minutes apart. Pablo Zabaleta also featured for the victors, who now sit fifth, two points behind Tottenham Hotspur in the race for fourth place, which the English media have now officially declared more important than who wins the actual title. On Sunday, Liverpool – with Javier Mascherano, Emiliano Insúa and an increasingly impressive Maxi Rodríguez, even if I still can’t work out why Rafa Benítez wanted to sign another wide midfielder – beat Sunderland 3-0 at Anfield to stay in that particular race.

In Italy, there was triumph and frustration. Diego Milito scored but Inter lost 2-1 to Roma, who leapfrog Milan into second, just a point behind the champions. Way back on Thursday, Napoli beat Juventus 3-1 with Ezequiel Lavezzi scoring the final goal. And on Sunday Mario Santana scored the third in Fiorentina’s 4-1 home win against Udinese – Fiore have won every match this season when Santana’s scored (which admittedly is only three times). Argentine-packed Catania lost away to Napoli on Sunday, 1-0. Meanwhile, Napoli centre back Hugo Campagnaro is getting closer and closer, it seems, to a call-up from Marcelo Lippi for the Italian national side. Campagnaro has Italian ancestry and moved to Serie A from Deportivo Morón, for whom he hadn’t made a first-team appearance. The one that got away?

One Argentine defender who sadly isn’t getting poached by any other country’s manager is Gabriel Heinze, and he, along with Lucho González, claimed the French League Cup on Saturday courtesy of a 3-1 win over Fernando Cavenaghi‘s Bordeaux (Cavenaghi came on in the second half). Lucho set up the opener for his side, who claim the first silverware of the season in France. In league action, Marcelo Delgado scored in the last minute as Lyon beat Grenoble 2-0. And Sebastián Dubarbier scored for Lorient, who smashed St Etienne 4-0. Franco Sosa was also playing for the winning side, whilst Gonzalo Bergessio was playing but ineffective for the visitors.

Lorient 4 – 0 Saint-Etienne (Dubarbier’s goal is third, and apologies for having to use a video with an advert in the middle of it)

In Germany, Martín Demichelis was wearing a mask (pictured above) to protect his facial fracture after Bayern decided to bring him back earlier than medical advice had suggested. He couldn’t do much to help though, as Bayern lost 2-1 at home to Stuttgart, and have now been unseated at the top by Schalke. Something went badly wrong with the scoreboard at the Olympiastadion, meanwhile, because it read at the end of 90 minutes that Hertha Berlin and Borussia Dortmund had finished 0-0, meaning Lucas Barrios couldn’t have scored.

Higuaín’s goal was Real Madrid’s third in the Madrid derby, and it proved crucial – having taken an early lead only to fall 3-1 behind, Atlético made it 3-2 through a penalty from Independiente’s former star, the Uruguayan Diego Forlán. That was how the match ended, and it proved the only telling Argentine contribution of the weekend in Spain (although Sergio Agüero and Eduardo Salvio both also featured for Atleti). One plus, though, was that Gabriel Milito looked solid as he continued his comeback from injury for Barcelona.

And as ever, Tom Clark is here to fill us in on matters Mexican.

On Friday the 26th Chaco Giménez, after a slow start to the campaign due largely to nagging injuries, finally picked up his first goal with the aid of great service by Tito Villa; but the brief show of veteran Argentine quality was not enough to prevent Cruz Azul going down 2-1 away to Estudiantes Tecos.

The following day the excellent Walter Lorito Jiménez scored twice early on (his second goal provided by Daniel Hachita Ludueña) to give Santos a lead away to Chivas de Guadalajara; but the Rebaño Sagrado, now again superlíder of the torneo, stormed back with an avalanche of goals to triumph 6-2.

And Pachuca managed a 1-0 home victory over Morelia on the strength of a goal by Damián Manso, whose steady and skilled contribution to the cause all season has been largely overshadowed the the Tuzos‘ indifferent results up to now.

Finally, a surprising Querétaro side took a large step toward staying up, and maybe even qualifying for the liguilla, by downing Atlas 2-1 en casa, the winning goal produced by a bit of Argentine magic from Javier Elizondo.