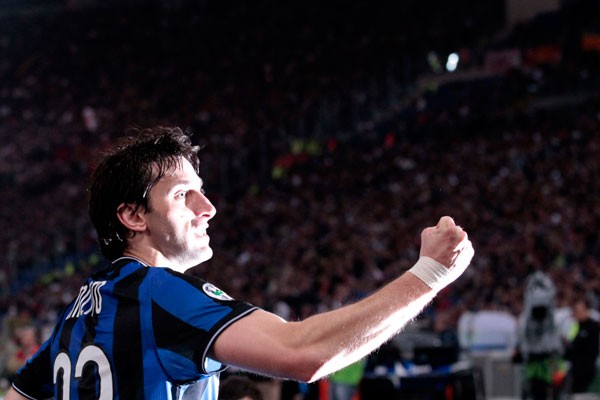 Very hard to put a proper date range on this week’s Argentines Abroad, what with various leagues running midweek rounds of fixtures as well in order to get their league seasons finished in time for the World Cup. Carlos Tevez is rumoured to want out of Manchester City at the end of the season, but all the same he seemed to be playing through the pain barrier for the club at the weekend. Diego Milito won a trophy for Inter on Wednesday night, Gabriel Heinze and Lucho González both scored as Olympique Marseilles claimed the Ligue Un trophy, and Lionel Messi came back to life with four goals in two matches in the space of four days. Elsewhere, Fernando Belluschi scored an absolute belter for Porto, and Tom Clark is back to give us the lowdown on the action in Mexico.

In England, Tevez has been rumoured to have fallen out with Manchester City manager Roberto Mancini, and with Real Madrid among the clubs reportedly showing an interest could move on now the club have failed to qualify for next season’s European Cup. All the same though, he played and scored from the penalty spot against Aston Villa to equalise for City, who went on to win 3-1. On scoring his penalty, Tevez didn’t celebrate much, and looked like he was in some pain – his movement at other points in the match betrayed this too. Diego Maradona will be keeping his fingers crossed it’s nothing too serious.

In Italy, Walter Samuel headed Inter’s first goal in their 2-0 win away to Lazio which keeps them top of Serie A with two matches to play. Elsewhere, former Boca defender Matías Silvestre opened the scoring in Catania’s 1-1 draw with Juventus, Maxi Pellegrino was sent off for Atalanta, who drew 1-1 with Bologna, and there was an Argentine double for Napoli, who won 2-1 away to Chievo Verona with goals at the end of each half from Germán Denis and Ezequiel Lavezzi. The victory means Napoli have qualified for the 2010-2011 Europa League. Santiago Morero, formerly of Douglas Haig and Tigre, also saw red in that match. On Wednesday night, Diego Milito got the only goal of the Coppa Italia final to keep Inter on course to become the first Italian team to complete the Treble of league, main domestic cup and European Cup.

Spain saw a return to form after a couple of disappointing weeks for Lionel Messi. On Saturday, Barcelona travelled to Villarreal seeking to put the disappointment of the previous week’s European Cup exit behind them, and won 4-1 with Messi scoring the first and last goals. And he scored twice again on Tuesday night in a victory by the same scoreline at home to Tenerife. He wasn’t the only scorer though – Pablo Piatti got one for Almería in a 4-2 win over Villarreal on the same night. On Wednesday, Gonzalo Higuaín scored the final goal of the match as Real Madrid ensured the title race with Barcelona will continue into the final two matches of the season with a 4-1 win away to Real Mallorca.

In France, Olympique Marseilles ended their 18 year wait for a league title with both Gabriel Heinze and Lucho González scoring in Marseilles’ 3-1 win over Stade Rennes. Combined with Lisandro López scoring a penalty in Lyon’s 2-1 win at home to Auxerre, that more than made up for a weekend round in which none of the Argentines had much impact in France. The same lack of influence wasn’t an accusation levelled in Portugal at the weekend though. Benfica had been looking forward to celebrating a title win this weekend, but their plans were ruined by a goal from Ernesto Farías and then surely the golazo of the week from Fernando Belluschi, who stuck the ball through Pablo Aimar’s legs before letting fly from outside the box. The goal sealed a 3-1 win for Porto, and means Benfica have to wait another week to sew up the league title.

And now, to the returning Tom Clark, who having witnessed my pathetic attempt to sum up the Mexican action last week, took pity and is with us again.

This weekend the opening legs of first round matches of the Mexican liguilla took place. There were important contributions from Argentines in three of those.

On Saturday May 1 Pachuca scored a 1-0 home victory over Monterrey on the strength of a dashing chip by Damián Alvarez, and on the same day, a cabezazo by Gabi Pereyra brought Morelia even at 2-2 in an exciting see-saw contest which the Monarcas went on to win 4-2 at home to Chivas.

On Sunday May 2 Rolfi Montenegro was the best player on the pitch for Club América, but his several strong second half shots on goal were denied by inches, and the Águilas had to settle for a disappointing 2-2 draw at home to Toluca.

Santos Laguna however had an all-Argentine victory in conquering Pumas (UNAM) 2-0 at home. The scoring opened with a sweet goal coming at the end of a precision move begun in his own end by Daniel Emanuel Ludueña and finished nicely by Walter El Lorito Jiménez. And the game was put out of reach by a second from the naturalised former Argentine Vicente Matías Vuoso, making a timely return from injury when it counts.

One thought on “Argentines Abroad: the last few days”