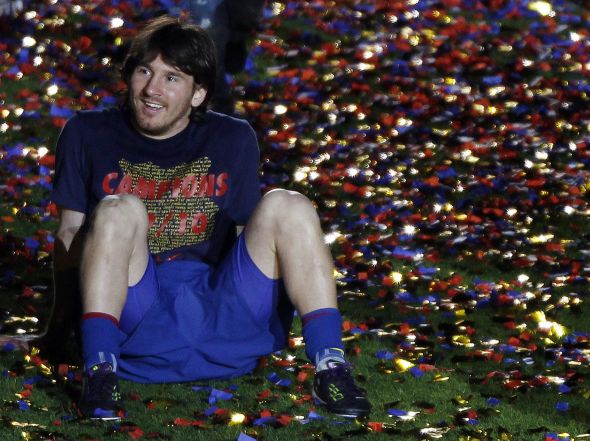 Well, and the semi-finals, in the case of the Mexican championship. Across Europe though, league championships have already come to a close a little earlier than normal due to the impending World Cup in South Africa, and as usual Argentines have been key for their clubs. Lionel Messi has equalled the record number of league goals scored by a Barcelona player in a single season. He’s in the team going to the World Cup. But statements of Argentina’s truly terrifying depth of talent run deeper still: Esteban Cambiasso and Javier Zanetti were two of the Argentines who wrapped up the Serie A title to add to last week’s Coppa Italia, and they’re not even good enough for Diego Maradona’s team! Hmm? What? Oh, I see…

One of the players Maradona did consider worthy of inclusion in his preliminary squad, Diego Milito, was once again key for Inter, having already scored the decisive goal of the Coppa Italia final. He got the only goal of the game again on Sunday as Inter claimed a 1-0 win away to Siena which confirmed their fifth consecutive Serie A title. Walter Samuel, the only Inter player who’s good enough to be competing for a starting place in Argentina’s side, also played, as did the aforementioned also-rans Cambiasso and Zanetti, who in spite of the latter’s assist for Milito’s winner, simply don’t match up to Maradona’s idea of a world-class midfielder and full back (Mario Bolatti and Gabriel Heinze are clearly streets ahead).

Elsewhere in Serie A it was a fruitful afternoon with Maxi López completing an impressive first half-season (yes, really!) with another goal as Catania beat Genoa 1-0. Hernán Crespo got the last goal in the 90th minute in Parma’s 4-1 win over Livorno. Milito finished as second top scorer in Serie A with 22 goals (Udinese’s Antonio Di Natale got an improbable 29) and Maxi finished joint 19th with 11, the only two Argentines to get into Italy’s top 25. Genoa’s former Boca forward Rodrigo Palacio was joint 9th in the assists table with 7, Ezequiel Lavezzi joint 12th with 6, and Javier Pastore, who’s had a fantastic debut campaign in Europe, joint 23rd with 5. Walter Samuel’s eleven bookings and single red card make him the only Argentine in the ‘discipline’ table for the Italian top flight.

In Spain, the big news was not only Barcelona’s second straight league title, but also the manner of their victory. With 99 points, they set an all-time European record (beating the 97 achieved by Internazionale in Italy three years ago), and were proclaimed by the (biased) daily Sport as ‘the best champions in history,’ in spite of falling at the semi-finals in their attempt to defend the European Cup won so thrillingly last year. Lionel Messi set up one and scored two himself in a 4-0 win over Real Valladolid to arrive at 34 goals in La Liga this season – equalling Ronaldo’s club record set in 1996-97 – and 47 in all competitions – also equalling Ronaldo’s club record set in 1996-97. As well as that, though, he’s also La Liga’s joint top assist-maker alongside Sevilla’s Jesús Navas. Oh, Gabriel Milito got a league winner’s medal too. Let’s not forget him, even if he too is not good enough for Diego Maradona’s preliminary squad.

Gonzalo Higuaín, whose Real Madrid side drew 1-1 away to Málaga to finish second, was himself second behind Messi in the scorers’ charts, with 27. One more detail: Messi has just had the highest-scoring season of any Argentine in La Liga history, overtaking Juan Pizzi and one Alfredo Di Stéfano. He pleased fans back here in Argentina no end with his pronouncement after the match during the celebrations in front of the Camp Nou fans, saying into the microphone; ‘Visca Barça, visca Catalunya… [and then switching to Spanish] y ¡aguante Argentina, la concha de su madre!‘, which I can’t translate here, what with HEGS being a family-friendly website and all. But rest assured he was happy.

Last week there was no Argentines Abroad, but that of course included several Argentine league winners as well, including Martín Demichelis claiming another Bundesliga title with Bayern München, Lisandro López winning the league (and being voted Ligue Un Player Of The Year in his debut season) in France, and Ángel Di María, Pablo Aimar and Javier Saviola claiming the Portuguese title.

There was no Argentine action in Mexico last week, but Tom Clark’s here to fill us in on a rather more successful weekend in the semi-finals of the liguilla.

In the semifinals of the Mexican liguilla, played on the 12th and 15th May, the Red Devils of Toluca eliminated Pachuca 3-2 on aggregate;  the Damiáns Álvarez and Manso fought hard in the ida, and Manso and Argentine-Croatian Dario Cvitanich, formerly of Banfield, scored, but the match ended a 2-2 draw, and with the second leg finishing 1-0, out went the Tuzos. (They end their season with a consolation however, having won the CONCACAF club championship, thus earning a place in next year’s World Club Cup.)

Toluca go through to the final to face Santos, who overwhelmed Morelia 7-1 in their second leg match at home (10-4 aggregate), Daniel Emanuel Ludueña and Vicente Matías Vuoso as usual playing major roles (Vuoso rang up a penalty late on in the onslaught).

Anyone wondering what’s happened to the HEGS / Mundo Albiceleste award for Best Argentine Abroad this year, don’t worry – it’ll be here soon. I just need to work out the logistics with Seba, the two of us being far busier this year than we were twelve months ago.

You can follow the Clausura and the Argentine sides in the 2010 Copa Libertadores via HEGS on Twitter (including updates during and between matches and similar stories that might not go up on the site until later). If you’ve not signed up yet you can do so here.

3 thoughts on “Argentines Abroad: the finales”