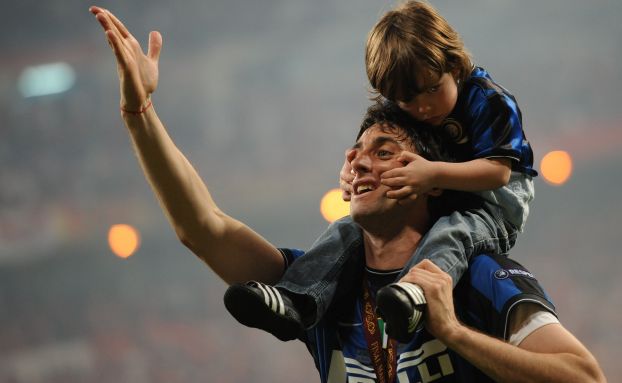 Well that was how Fox Sports commentator Fernandi Niembro put it after the final whistle, at least. In Madrid, Internazionale have beaten Bayern München 2-0 with a thoroughly convincing performance and two brilliantly taken goals from Argentina bit-part player Diego Milito to claim their third European crown, 45 years after the last one. Martín Demichelis had to do a lot of Bayern’s defending on his own, whilst for the victors as well as Milito, Walter Samuel, Javier Zanetti and Esteban Cambiasso were also involved.

Zanetti, playing his 700th match for Inter (he’s closing in on the all-time club record) lifted the cup after a display that saw him largely kept out of the limelight, partly by Milito’s goals and partly because Brazilian Thiago Motta’s suspension necessitated playing the captain in midfield rather than left back, and therefore he wasn’t able to have a go at nullifying Bayern’s only threat, posed by Arjen Robben down the right wing. Cambiasso worked tirelessly as ever in the midfield and Samuel was impassable at the back (not that Bayern tried to pass him much), but Milito stole the show with his two goals, and might (had Wesley Sneijder had his shooting boots on) have finished with at least one assist, as well.

The title was Esteban Cambiasso’s 20th winner’s medal. As such, he’s now level with Nicolás Burdisso and only one trophy behind Alfredo Di Stéfano in all-time list of most successful Argentine players. He won’t, of course, get the chance to add to his tally in South Africa next month. Nor will Zanetti. And for that reason, their two club-mates who are going, as well as the defeated Demichelis, have their own chances of doing so severely dented. If nothing else though, Argentina fans with a bit of sense will be hoping his two goals in the final have pushed Milito into consideration for the role as the selección‘s starting number 9.