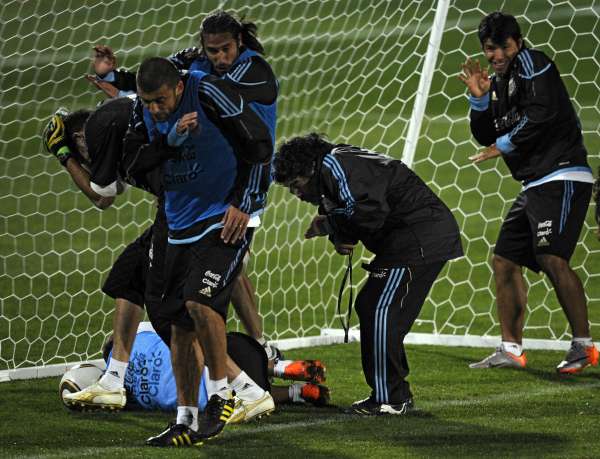 As the selección engaged in a game of attack vs defence which supposedly revealed Diego Maradona’s first-choice eleven for Saturday’s World Cup debut against Nigeria, funny goings-on were underway on Tuesday morning back in Buenos Aires. The barra bravas deported from South Africa are planning legal recourse to return to watch the tournament, whilst another NGO – this one less barra-friendly – is calling for two senior figures to be investigated for links to the barras. The senior figures in question? You might know the names: Diego Maradona and Carlos Bilardo.

This new NGO is called Asociación de Familiares de Víctimas por la Violencia en el Fútbol Argentino – Association of Victims of Violence in Argentine Football – and their call follows Bilardo’s and Maradona’s declarations since arriving in South Africa that they had nothing to do with, and aren’t familiar with, the ‘official’ 22-man barra brava that was on their plane travelling to Johannesburg. An official legal challenge against the AFA was presented last week following the news that barras had been present on the plane that also carried the national team and several AFA officials.

Maradona spent the last ten minutes or so of the first press conference, last Thursday, denying he had anything to do with the barras, whilst Bilardo has spoken to the press again today to insist, ‘they don’t ask anything from me, and I don’t talk to them.’ He did, however, admit to knowing some barras – although he’d denied last week that the particular ones on the plane were among them. The relationship between Maradona and Bilardo and the ‘official’ barra of the selección, which is mainly made up of Chacarita and Boca barras, is thought to go back to the Mexico 86 World Cup.

In lighter news, the national side’s training session on Tuesday again saw Maradona seeming to plan around the same team I mentioned here on HEGS yesterday, with a three-man backline aided by Jonás Gutiérrez shuttling back from right midfield to cover (and the losers forced to stand in the goal and have shots aimed at them, pictured above). The thinking seems to be that against theoretically less strong opponents, Maradona can afford to sacrifice some of the ‘solidity’ that comes from stringing four centre backs across the defence, and look to get forward a little more often. To that end, the attacking trident of Lionel Messi, Carlos Tevez and Gonzalo Higuaín is looking ever more likely to be the first choice one. Diego Milito, needless to say, still hasn’t got a look in.

5 thoughts on “Under investigation?”