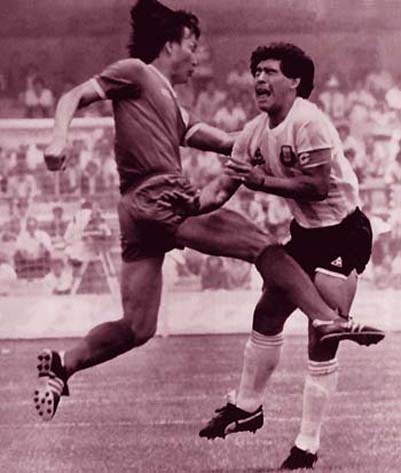 Argentina’s preparation for the second match of their World Cup challenge gathers apace. The main issues following the flawed but encouraging performance in the 1-0 win against Nigeria on Saturday were the right back position – where Jonás Gutiérrez clearly wasn’t comfortable – and the extent of Seba Verón’s calf strain, which won’t keep him out for long but may do so for tomorrow’s match against South Korea. In his place, and in the absence of a like-for-like replacement, Maxi Rodríguez could be joining his Liverpool club-mate Javier Mascherano in the midfield.

Gutiérrez’s replacement at right back was looking likely to be a slightly more straightforward swap, with Nicolás Burdisso – the Roma centre half who played in the position a fair few times during his time at Internazionale – offering more solidity than Jonás, with his lack of experience as a full back (just two matches, against Peru in the penultimate qualifier and Canada in the warm-up match), was able to against the pace of Nigeria’s left wing.

It looks like Jonás might well be deployed in the same position again though, after Tuesday’s practice session featured Burdisso in the substitutes’ team and the Newcastle man amongst the starters in the defence. With Manchester United’s Park Ji-Sung only the most well-known of the dangers on South Korea’s flanks, the fear is that Argentina’s opponents have taken note and, if Jonás plays at right back again, will seek to isolate him on that side.

And South Korean boss Huh Jung-Moo knows all about getting in Argentina’s faces – it was he who gave Diego Maradona an infamously tough time with a series of rough challenges when the two sides met in Mexico 86 – most famously a mid-air kick (pictured below) which – if not at the time then certainly over the last couple of days in the papers – earned him the geographically dubious nickname ‘Kung Fu’ in Argentina. That didn’t affect the outcome, though – Maradona was superb as Argentina won 3-1.

Should Maradona’s decision in what was an open training session prove to be a bluff, and Burdisso in fact end up coming in, it would provide the backline with a little more stability than they had against Nigeria, though slightly more assured performances from the other three defenders (the two centre backs especially) also wouldn’t go amiss. The other big issue, though, is how to replace Juan Sebastián Verón, who in truth wasn’t exactly stellar against Nigeria, but is a good friend of Maradona and, in spite of Javier Mascherano carrying the captaincy, perhaps the manager’s main voice on the pitch.

The problem here (in as much as replacing someone who played poorly in the first match is a problem) is that there’s no other midfielder in the squad who plays in a similar role to Verón. Javier Pastore, if Maradona were to trust his relative inexperience with a starting place in a match it’s still important to win, plays much further up the pitch and Mario Bolatti, although it’s been suggested he could replace either Mascherano or Verón, is far more suited to the destructive role. Oh, and shouldn’t be in the squad anyway.

To that end, Maxi Rodríguez is likely to come into Verón’s starting position on the right of the midfield three, but will play a slightly different role with his greater pace and running. Lionel Messi and Carlos Tevez’s link play was good enough in the first match (and Verón’s own passing so off colour) that I doubt La Brujita will be missed too much – although important to note he’s being guarded for later matches due his strain, rather than dropped from the team – but it will be important the midfield continue to look for the two forwards when they drop deep to collect the ball. Ángel Di María looks like he’s keeping his starting role, somehow, in spite of being almost entirely anonymous in the opening match.

2 thoughts on “Plans and issues”