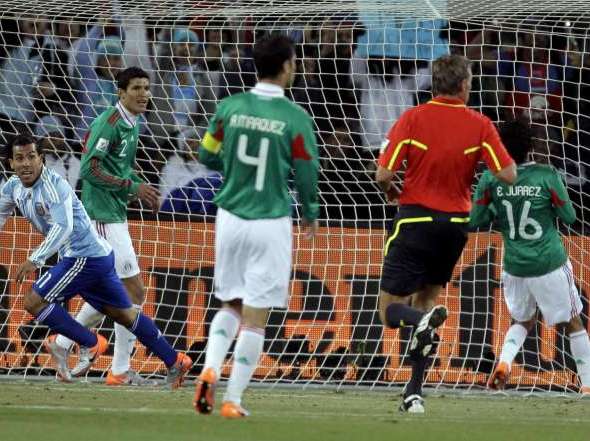 Carlos Tevez is, according to Diego Maradona, el jugador del pueblo (‘the player of the people’). On Sunday, hours after the controversy during Germany’s 4-1 thrashing of England, linesman Stefano Ayroldi confirmed to the world that he was indeed one of those ‘people’, allowing Tevez to open the scoring from a long way offside after Argentina and Mexico had got stuck into a very entertaining match. Following that controversy though, there was no arguing with Gonzalo Higuaín’s neat finish or with Tevez’s thunderous second. Manchester United’s new signing Javier Hernández pulled one back for Mexico, but it wasn’t to be. Argentina won 3-1 and now look forward to Germany in a rematch of the 2006 quarter-final.

Carlos Salcido, the Mexican left back, had already smashed a long-range shot against the crossbar early on, and the game was flowing from end to end, by the time Tevez rushed towards goal and Oscar Pérez rushed out of Mexico’s goal to block his effort. Lionel Messi was following up and his shot was deflected in by Tevez, who was by that point in a clearly offside position. Quite aside from (instinctively and not deliberately, of course) stealing what would finally have been Messi’s first goal in the tournament, Tevez ran off to celebrate and the goal looked like it was going to stand, whilst the Mexican players surrounded Ayroldi. The TV screens in the stadium were replaying the goal and both referee Roberto Rossetti and Ayroldi, having already awarded the goal, were unable to chalk it off even as they watched and saw that it shouldn’t have been given.

Argentina had profited from that piece of good fortune, and another came their way shortly afterwards when Ricardo Osorio had a moment of madness whilst trying to play the ball out of the Mexican defence and presented the ball straight to Gonzalo Higuaín, who took it round the goalkeeper wonderfully and made it 2-0 to Argentina. At the interval there was a melée involving players from both teams and – inevitably – Diego Maradona as Mexico continued to protest to the referee about the goal.

The second half was played at a more sedate pace, principally because just seven minutes into it Tevez shrugged off a couple of Mexican challenges and lashed in a vicious shot from all of 25 yards which was quite definitely not offside. At 3-0 down, Mexico seemed to decide it wasn’t to be their day, although Salcido still came close and Hernández, turning Martín Demichelis superbly as he had earlier in the first half with the score at 0-0, struck a well-taken consolation for Mexico. The final score was 3-1 to Argentina though. It’s the Albiceleste’s first win in 90 minutes in the knockout stages of a World Cup since Italia 90, believe it or not!

And what do they get for it? A date with Germany on Saturday. After a replay of 2006’s round of sixteen, we’ve got a replay of 2006’s quarter-final. The nail-biting starts here. Not least for Lionel Messi, who as a result of once again failing to score lost a bet with manager Maradona. ‘I’m going to tell him it’s double or nothing for the next match,’ Messi told reporters after the game.

15 thoughts on “South Africa 2010: Argentina through, with a little help”