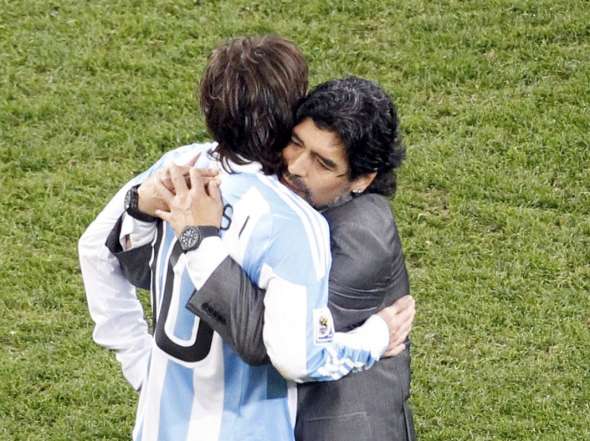 The octopus predicting Argentina’s downfall was right. On Saturday, Diego Maradona’s team crashed out of the 2010 World Cup, thrashed 4-0 by an excellent Germany side meeting their own first real challenge of the knockout stages. A lack of creativity in midfield, Javier Mascherano being asked to do too much as the sole cinco and poor performances from both full backs all helped the Europeans, but Germany were brilliant. Diego Maradona was distraught after the match, but insisted in his press conference that he wasn’t resigning right away without having thought things through.

After falling behind in only the second minute to a poorly defended free kick from Bastian Schweinsteiger which Thomas Müller headed in off Sergio Romero, Argentina were forced to chase a match for the first time in this World Cup, and struggled. Germany’s early goal gave them the chance to relax and play their own game, whilst Maradona’s men looked increasingly rushed as the first half went on.

Argentina’s midfield were too narrow to deal with Germany’s threat down the flanks, and with the front three remaining fairly static when Germany had the ball, the pressure was taken off Germany’s full backs – especially Philip Lahm who was given plenty of space to isolate Gabriel Heinze. By contrast, when Argentina got forward Heinze and Nicolás Otamendi on the right were hesitant to join the attack. A lack of creativity in Argentina’s midfield meant Carlos Tevez and Lionel Messi had to drop increasingly deep to pick the ball up.

Messi did as well as he could under the circumstances, evading any number of challenges and passing the ball far better than his team mates for the most part. Gonzalo Higuaín had a bad day distribution-wise up front, and was easily crowded out by Germany’s centre backs, and Ángel Di María decided to ensure he couldn’t be criticised for poor passing by just not bothering to pass the ball at all.

There were basic errors then from some players, but they were exacerbated by a genuinely excellent German performance. Maradona’s only tactical gambit before the break was to tell Di María (who started on the left) and Maxi Rodríguez (on the right) to swap sides, which just led to both of them continually cutting inside from the edge of the penalty area, giving Germany’s defence plenty of time to adjust. After the break, as Germany got three further goals from targeting Argentina in the right back position where Otamendi had an uncharacteristically bad game defensively, the only answer the manager could come up with was the throw more and more attackers on.

Seba Verón or Javier Pastore might have made a difference in the first half – more creativity in the midfield would have allowed Messi to stay a little further forward, whilst Verón’s discipline and experience would have helped Mascherano out in the deep midfield role as well – but Argentina finished the match with Messi, Tevez, Sergio Agüero, Pastore and Higuaín all on at the same time. Tactics? Nothing of the sort. Diego Maradona has demonstrated throughout this World Cup that he’s a better man manager than he was given credit for, and that he’s improved his understanding of how to run a team immeasurably. He’s still not a true football manager, though.

After the match, Maradona rightly praised the players for their effort and previous performances during the tournament, and expressed his wish that ‘they keep demonstrating what they can do.’ He also – wisely in my opinion – said he wouldn’t be resigning yet, having not had time to consider his position. I’m not sure he can really continue now, but I wished José Pekerman had taken more time four years ago, so I shan’t bawl at Maradona for doing so now.

Uruguay, for all the controversy surrounding the final minute of their match yesterday, are in the semis thanks to a clear system. The Netherlands outwitted and out-thought Brazil. Germany arrived with a good idea of how to play their game, and triumphed. It’ll be interesting to see where the selección go from here.

8 thoughts on “Paul was right”