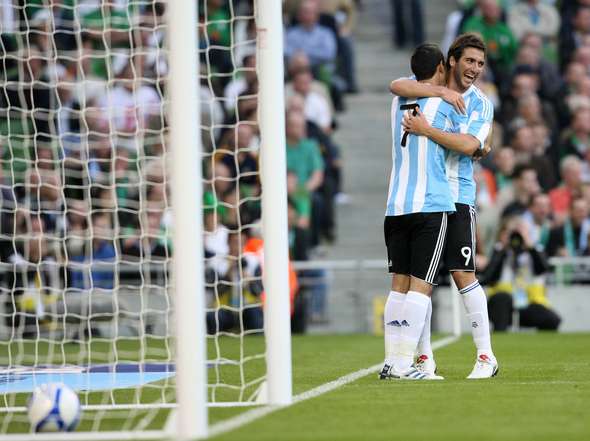 Although I am leaving this article unedited, I’ve updated the title and am putting this notice in to explain that I’m a massive idiot who’d totally forgotten – like Shay Given – that there’s no offside played from goal kicks. Thanks to Pegamequemegusta for reminding me in the comments…

Ángel Di María scored the most important goal of Sergio Batista’s reign as Argentina’s youth team manager – the winner in the Olympic Football Tournament final in Beijing 2008 – and today he scored the first goal of Batista’s spell as caretaker manager of the full national side. As a result, Argentina beat the Republic of Ireland 1-0 in the inaugural match at the new-look Lansdowne Road. It was a good finish, somewhat tarnished by the fact that Gonzalo Higuaín, immediately before setting it up, had been approximately the length of the pitch offside. All the same Argentina’s first half showing was good – the second, less so.

Batista afterwards remarked that ‘the first half was worth eight out of ten,’ which might have been overdoing it a bit, but it was a far more balanced and assured performance than the disastrous one which saw Argentina thrashed by Germany in the quarter-finals of the World Cup. With Ever Banega quietly impressive and Fernando Gago… well… I’m sure he was doing something alongside Javier Mascherano in central defence, the midfield was more disciplined for one thing. Lionel Messi has had a mixed pre-season with Barcelona, playing only halves of matches and, according to the club doctor, he’s not at optimum condition yet. He wasn’t spectacular today, but showed enough of his talent that the crowd at the brand new stadium rose to their feet to applaud him from the pitch when he was replaced with Ezequiel Lavezzi in the second half.

When Higuaín took down goalkeeper Sergio Romero’s long punt forward and flicked it on for Di María to finish brilliantly, lobbing Shay Given and watching the ball bounce in off the far post, the Manchester City goalkeeper was furious. Replays (eventually) showed why – Higuaín had been offside to an almost comical degree, and the linesman somehow failed to spot it. Although Argentina had plenty of good spells with the ball, and the performance was more than acceptable given that they’re only just starting a semi-major rebuilding project following Diego Maradona’s exit as manager, the Republic of Ireland did have a number of chances to score themselves, not least with a couple of corners in quick succession right at the death. Martín Demichelis looked less nervous than during the World Cup, but does Fabricio Coloccini really merit playing time for Sergio Batista’s national side?

Argentina did at least finish with two natural full backs on the pitch – Pablo Zabaleta replacing starter Nicolás Burdisso at right back, and Emiliano Insúa replacing Gabriel Heinze on the left. That’s one step forward, as was Di María’s greatly improved (if still not massively spectacular) performance compared with his World Cup ones. One notable point, given events in the run-up to the game: Carlos Tevez didn’t feature at all. Whether he’s going to be cast out of the selección now after criticising Julio Grondona yesterday remains to be seen. But at least the team have a morale-boosting win under their belts in the post Diego era.

International friendly, 11th August 2010: Republic of Ireland 0 – 1 Argentina (with apologies for the Portuguese commentary – it’s the only video I can find with a decent picture)