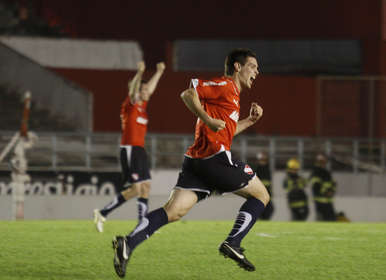 Independiente’s caretaker manager Rivardo Pavoni celebrated the team’s first win of the season on Friday evening thanks to Leonel Galeano’s 27th minute goal which consigned Gimnasia La Plata to defeat. El Rojo won 1-0 in the Doble Visera to give their fans something to look forward to next week, when the new manager will be named. Earlier, Vélez Sarsfield had returned to the top of the table, at least until San Lorenzo play Colón tomorrow. The Liniers outfit won 3-0 against Olimpo, who finished with nine men. You can see all four of Friday’s goals right here.

In the post-match interview, Vélez midfielder Sebastián Domínguez said when asked whether Vélez had looked on Olimpo as easy opponents; ‘We saw Olimpo against San Lorenzo, and we went out to play, which is something that’s becoming lost in football. We knew that Olimpo weren’t going to just let us come at them, but we pressured them and eventually that told. Our three forwards played brilliantly, they scored their chances, and that made the match look easy, but in reality calling a match like this easy is misleading, although closing out the game with two extra men simplifies things.’ The interviewer then asked about the importance of winning after two straight draws, and regaining the leadership of the league table. Domínguez responded exactly as he’d be expected to (well maybe not – I’d have been tempted to point out what a stupid question it was, to be honest); ‘It adds pressure to the other teams, it means they’ve got to win their matches now. For us, getting three points at home helps justify the work we’ve been putting in.’