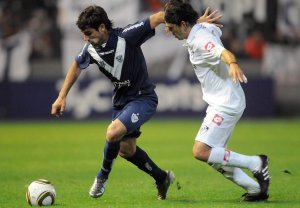 Friday evening’s matches in the 2010 Torneo Apertura saw Vélez Sarsfield move up to second in the table with a comfortable 2-0 win away to Quilmes, with Uruguayan striker Santiago Silva scoring a peach of a goal to finish the hosts off after Juan Manuel Martínez had opened the scoring, stabbing home from a first half corner. Earlier on, San Lorenzo had hosted Tigre at the Nuevo Gasómetro and also won 2-0. Juan Carlos Menseguez scored early on for Ramón Díaz’s side, and Sebastián Balsas got the second with just under quarter-of-an-hour remaining. You can watch all four of Friday’s goals right here.