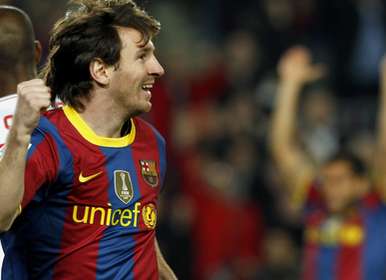 This weekend’s matches didn’t see a repeat of Ezequiel Lavezzi’s brilliant chip last week from any of the foreign Argentines, but all the same we’ve got some lovely goals and one frankly ridiculous piece of trickery in the rain from Porto’s Fernando Belluschi for you. Lionel Messi scored twice for Barcelona, Maxi Rodríguez made a meaningful contribution for Liverpool for a change, and Pablo Aimar, on Diego Maradona’s 50th birthday, scored a goal worthy of the great man himself. All this and more, right here…

Maxi has struggled for form somewhat since he joined Liverpool in January in slightly baffling circumstances (not so much why did Liverpool consider him good enough, as why did Liverpool think that what they really needed was another wide midfielder?), but on Sunday he scored the only goal of the game to give the Reds a vital victory over Bolton Wanderers with just a few minutes to go. Elsewhere in England, Carlos Tevez didn’t feature in Manchester City’s shock defeat to Wolverhampton Wanderers, but Pablo Zabaleta did, and was booked.

One of the Argentine goalscorers in Spain at the weekend was considerably more surprising than the identities of the other four. Whilst Lionel Messi, Ángel Di María, Sergio Agüero and even Pablo Piatti are names one might expect to associate with the scoresheet, Diego Colotto isn’t. But the former Estudiantes defender got a goal with three minutes to in Deportivo de La Coruña’s 3-0 win at home to Mauricio Pochettino‘s Espanyol. That was on Sunday, and on the same day Agüero and Piatti got the goals as Atlético de Madrid and Almería drew 1-1 in the Vicente Calderón. The previous day, Messi had scored twice (to take his tally to sixty-one goals in sixty-one games in 2010) and set one up as Barcelona got an embarrassingly easy 5-0 win at home to Sevilla, and Di María got a 52nd-minute equaliser for Madrid away to Hércules – they went on to win 3-1 thanks to a late brace from Cristiano Ronaldo.

Nicolás Burdisso and Ezequiel Lavezzi got the weekend’s only Argentine goals in Italy. Burdisso gave Roma the lead at home to Lecce just after the hour, and helped his side to an eventual 2-0 win. Lavezzi, meanwhile, had promised to celebrate with a homage to Maradona if he scored on his idol’s birthday weekend, and was as good as his word. After smashing the ball into the roof of the net from a few yards out, he threw himself to the ground a la Diego in the critical World Cup qualifier at home to Peru last year, before pretending to recreate the ‘Hand of God’ against England in the 1986 World Cup quarter-final.

And with that, and the addition that Martín Demichelis also scored, to put Bayern München 1-0 up in a match they eventually won 4-2 against Freiburg, it’s time for me to turn Argentines Abroad over to our correspondents for the week. Remember: Twitter profiles where available are linked to from the writer’s name; blogs a little further on.

Ben Shave is a fellow In Bed With Maradona writer and keeps the excellent Cahiers Du Sport blog. He’s here to tell us what’s been going on in Portugal.

It is perhaps fitting that, on the weekend of El Diego’s fiftieth birthday, one of the many Argentines once saddled with the burden of being named his possible successor stole the headlines for his club, with an outstanding solo goal. Pablo Aimar opened the scoring for Benfica against Paços de Ferreira after just 14 minutes, and what a goal it was. Picking up possession in his own half, the reported River target glided forward unchallenged, with the Paços defence backing off. He skipped past two markers, fooled another with a graceful feint, and curled a sumptuous shot beyond Cássio into the top corner. It was a strike of rare quality, and highlighted the continuing importance of Aimar to the Lisbon side. Nico Gaitán and Javier Saviola completed 90 minutes for the Eagles, whilst Eduardo Salvio returned from injury with 25 remaining, but none of them had nearly as much of an impact as El Mago.

Fernando Belluschi was the sole Argentine starter for FC Porto at Académica, in conditions which can only be described as biblical. The driving rain and ensuing sticky pitch meant that the former Newell’s and River man found himself somewhat marginalised, as the game degenerated into kick and rush. A couple of moments of skill aside, this was a quiet outing for Belluschi. Nico Otamendi joined him (somewhat reluctantly I suspect) from the bench as Porto successfully shut up shop having taken a 1-0 lead.

I’m going to stick this video of one of those ‘moments of skill’ in here because although it didn’t lead to anything, I thoroughly enjoyed watching it.

A slew of injuries to the Sporting back line meant that Paulo Sérgio handed a first full start to Marco Torsiglieri as the Lions travelled to União de Leiria. The Vélez youth product enjoyed a steady 90 minutes, content to play second fiddle to captain and central defensive partner Daniel Carriço. Torsiglieri showed his potential against Lille in the Europa League, but was rarely called upon in a forgettable match, with his side eventually running out 2-1 winners.

Tom Clark’s blog is here. He’s our ever-dependent Man In Mexico, and this week he’s got an epic rundown for us.

If fútbol mexicano is your cup of tea, this past week you could have drowned in it.

Rounds 15 and 16 of the Mexican torneo were jammed into one week (gasp). What a week. Down with pneumonia, dizzy with antibiotics… and the damned Argentines would give no quarter. Players born in Argentina scored no less than 14 goals in the week, which must be some kind of record.

The most spectacular match of the week may have been the first one, on Tuesday the 26 October. Pachuca, playing at home against Tigres, jumped out to what appeared a comfortable lead behind two Darío Cvitanich goals. But then the felinos from Nueva Léon, showing considerable fight over past weeks, outdid themselves by rallying back to win on three second-half scores. A Lucas Lobos penalty in the 77th minute drew them even, and then Damián Álvarez, giving his all against his former club, won it with a 79th minute goal that kept the Mexican league’s Lazarus club – who’d looked destined for relegation as recently as six weeks ago – on track for a spot in the liguilla. If they manage that, it will constitute the surprise of the torneo.

On Wednesday the 27th Cruz Azul established themselves as clear superlider, and simultaneously also qualified for the liguilla, with an impressive 4-2 win away to a very strong Monterrey club. Emanuel Tito Villa notched his fifth of the season for the Maquina Cementera, the powerhouse of the torneo so far.

On Thursday the 28th, in a match between division rivals at San Luis, América came away with a precious 2-1 away win on the strength of goals by Daniel Rolfi Montenegro and Vicente Matías Vuoso (his seventh).

Then came the weekend, and… more fútbol.

Saturday the 30th saw Cruz Azul steal a win at home against a battling Puebla. The difference-maker in a tense 1-0 match came from the great Christian Chaco Giménez, who proved to be the right man in the right place at the right time, capitalizing on a horrendous goalkeeping error to knock home the winner in the 81st minute.  It was Chaco’s eighth tally of a very busy campaign in his new blue shirt.

On the same day Pachuca took a bit of the sting out of their midweek debacle with Tigres at Atlas of Guadalajara by overcoming an early Atlas lead – the product of Alfredo Chango Moreno‘s fifth goal of the season – to take a 2-1 victory made by goals from Damían Manso (his second) and Darío Cvitanich (his seventh, a 74th minute winner).

The weekend’s glut of games finally came to a close on Sunday the 31st. Monterrey steadied their ship with a 2-0 away win over Morelia, clinched in the ninetieth minute by Nery Cardozo‘s second goal of the torneo. On the same day, the Águilas of América, flying high in their colossal Azteca, buried struggling Estudiantes Tecos 4-1. The third score in this runaway was Rolfi Montenegro’s fifth of the season, a free kick that skimmed grass all the way. The Estudiantes wall leapt…and the raton ran underneath. Mauro Cejas pulled one back for Estudiantes, his fourth of the season, but it was too little too late.

Montenegro’s curiosity goal of the week

And finally Sarah Rudd, author of On Footy, is here to fill us in on life in Major League Soccer.

The first leg of the MLS Conference semifinals started off with Colorado hosting the Columbus Crew.  Possibly affected by the altitude, Guillermo Barros Schelotto [Ed: who announced the other day that he’ll hang up his boots at the end of the MLS season, at the weekend] had a very quiet first half with uncharacteristically sloppy passing. Guille had the best scoring opportunity for Columbus in the second half as a poor clearance fell to him at the top of the box, but his volley went well over the crossbar.  He was eventually substituted in the 68th minute.  Gino Padula and Claudio Lopez were unused substitutes and Columbus trail Colorado 1-0 going into the second leg.

Javier Morales and Fabián Espíndola played major roles for Real Salt Lake in their 2-1 loss to FC Dallas. Espíndola showed his speed and strength as he was able to hold off his defender and superbly finish with his left foot to give RSL the lead in the 5th minute. He and Morales combined well in the first half and Espíndola had several good scoring chances but couldn’t quite put them away. The second half was a different story for the pair. Morales picked up a silly yellow card for playfully slapping Dallas captain Daniel Hernández in the face after he had come in late after the whistle had been blown for an injury. Hernández retaliated and the ref decided to card them both. Hernández was nearly sent off for a professional foul on Morales a few minutes later, but the ref decided against it. Instead it was Morales who was sent off, called for a dangerous play on a bouncing 50-50 ball. Both cards showed a lack of judgment from Morales and mar what was an otherwise fine performance by him. Espíndola’s night was cut short as a result of the dismissal, making way for the more defensively-minded Jean Alexandre in the 73rd minute.