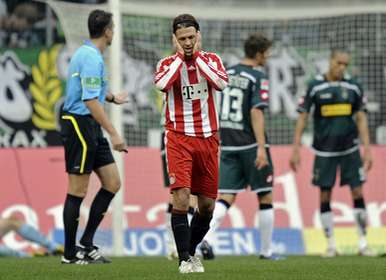 This weekend Argentines were in fine form in Spain, Portugal and Mexico, whilst in the USA a Boca Juniors legend might have played his last game, as Guillermo Barros Schelotto’s Columbus Crew exited the MLS playoffs. The selección’s first-choice centre back pairing both had poor weekends, though. Martín Demichelis’ Bayern München dropped points, whilst Walter Samuel injured his cruciate ligaments and will miss the match against Brazil later in the month, as well as quite some time thereafter. All this and more, right here…

Samuel‘s injury came as the Internazionale defender contested a ball with Brescia’s Andrea Caracciolo, and landed badly, causing his right leg to buckle under him. According to club manager Rafael Benítez immediately after the match, it’s a ‘serious’ injury, and studies confirmed he’ll be out for the rest of the Serie A season. The match itself finished 1-1, and on the same day – Saturday – Ignacio Piatti started for Lecce away to Bologna, who won 2-0.

In the English Premier League, Jonás Gutiérrez and Fabricio Coloccini both had parts to play as Newcastle United fought out a deserved 1-0 away win over Arsenal, and Maxi Rodríguez impressed again in Liverpool’s 2-0 win over league leaders Chelsea, but the most distinguished Argentine performer of the weekend was Pablo Zabaleta, who put in a good shift at right back for Manchester City as they beat West Bromwich Albion 2-0 away. In Germany, Martín Demichelis was part of a Bayern side who threw away a 2-1 half time lead and ended up scrambling a late equaliser to claim a 3-3 draw, a match in which Raúl Bobadilla, the former River Plate midfielder, played all 90 minutes for Borussia Mönchengladbach. In France, Lucho González scored for Marseille, who lost 2-1 to Paris Saint-Germain.

Internacional de Porto Alegre welcomed Roberto Abbondanzieri back to keep goal after he’d sat out nearly a month and a half watching Renan take his place. He conceded two goals – one a trumped-up penalty – as Inter, who were missing Andrés D’Alessandro and Pablo Guiñazú, drew 2-2 with Atlético Goianiense.

And with that it’s over to our correspondents.

Welcome to David Cartlidge, our newest contributor, who’s going to be giving us the lowdown on Spain. You’ll find his blog here.

Saturday was almost a non-event in the Spanish Primera, with all the big guns playing on Sunday evening and the clash on Monday. Juan Forlín played a big part in Espanyol’s 1-0 victory and clean sheet against Málaga, the defender elegant as ever. Aldo Duscher was this week ruled out for 3 weeks with a leg muscle injury, a shame given his recent form under his manager Mauricio Pochettino.

On Sunday Pablo Piatti put in another solid display for Almeria in a 1-1 draw with Sporting Gijón. His run down the left and well flighted cross set up his side’s goal. His team-mate Hernán Bernardello gave a good performance and played 80 minutes, while Leonardo Ulloa got a 20 minute run out as a sub but was ineffective. Mateo Mussachio put in another solid performance for Villarreal in their 4-1 win over Athletic Bilbao – he got an assist, and didn’t even miss his countryman and defensive partner Gonzalo Rodríguez, who was out through suspension.

In Zaragoza, Nicolás Bertolo’s volley for the home side took a little deflection, but it levelled their game and he saw fit to whip his shirt off afterwards in delight. His team went on to win 3-2. Leo Ponzio was subbed after 45 minutes as a precaution, as he’s a caution away from a suspension and Zara want him available for their next game against Sevilla. For visitors Mallorca, Fernando Cavenaghi was left on the bench, a strange decision considering he bagged a brace last week for the islanders. Questions do remain over his relationship with Coach Michael Laudrup though.

Lionel Messi took his tally to 8 league goals for the season against Getafe in a 3-1 away win for Barcelona in which Javier Mascherano also featured. He started a fine move before finishing it himself after neat interplay with David Villa. Daniel Cata Diaz was snoozing a little when he received a poor pass from his goalkeeper – not a good idea when Messi is around, after his sharp interception he laid a pass off for teammate Pedro to score. In the capital, Ángel Di María weighed in with an assist for Real Madrid as they beat City rivals Atletico – for whom Sergio Agüero was largely isolated for much of the game – 2-0. Gonzalo Higuaín’s volley was struck with almighty venom and would’ve been a contender for goal of the season – had it not cannoned off the post.

Monday night saw Diego Perotti start on the right hand side for Sevilla in a 2-0 win over Valencia. He had a few decent runs at his fullback but other than that was quiet before being substituted. The tricky winger is more comfortable on the left, but Jesus Navas’ injury is obliging him to fill in on the right.

This weekend saw the biggest date in the Portuguese footballing calendar, as FC Porto hosted Benfica at the Estádio Dragão. Three Argentines started the game – Fernando Belluschi in the Porto midfield, with Pablo Aimar and Eduardo Salvio forming part of the Benfica attack.

It was Belluschi who was to exert the greatest influence over the game, with the little midfielder delivering a first-half performance of devastating effectiveness. His first moment of class came after twenty-five minutes. Having skinned the Brazilian David Luiz, the former River man delivered a deft cross which was brilliantly flicked home by Colombian Radamel Falcao García, another former favourite at the Monumental. Belluschi was also the architect of Porto’s third, which essentially killed the game as a contest. Running onto a long ball, he kept his calm and squared for Falcao, who crashed a shot home. Porto went on to win 5-0, and already look favourites to take the title.

As you may have gathered, Benfica’s Portuguese contingent didn’t have the best of nights. Aimar was isolated for the most part, with Salvio and second-half substitute Nicolás Gaitán muscled out of the game by Porto. Franco Jara and Javier Saviola were unused substitutes.

Sarah Rudd, who runs On Football, is here to let us know about the action as Major League Soccer edges towards its conclusion.

In the days leading up to Columbus’s second leg against the Colorado Rapids, Guillermo Barros Schelotto hinted at retirement stating that every day he has less desire to play. If that’s the case, it sure wasn’t evident on Saturday as Guille put in an inspired performance. He hustled for every ball and created numerous chances for his teammates. He eventually set up Eddie Gaven’s tap in by heading the ball back across goal after some sloppy play in the box. Claudio López made his first appearance in a month as a late substitute, coming on right before Colorado scored the equaliser forcing the match into extra time. With no goals in extra time, the match was decided by penalties. Both Schelotto and López scored theirs, but Colorado went on to win 5-4 and advance to the next round. Schelotto is now out of contract with Columbus and even though he hinted at retirement, he also expressed his desire to play one more year for the Crew. The fans certainly made their feelings known, bowing to him every corner kick he took. López and the Rapids host the San Jose Earthquakes in the Eastern Conference Finals. Gino Padula was an unused substitute for Columbus.

The other matchup featuring Argentines was Real Salt Lake vs FC Dallas. RSL’s playmaker Javier Morales was missing due to suspension for a red card in the first leg. Fabián Espíndola looked extremely dangerous but could not find a way past Kevin Hartman and RSL went out on aggregate. Dario Sala, Hartman’s backup, was an unused substitute for Dallas.

And last but certainly not least, our original contributor Tom Clark, whose blog is here, tells us what’s been going on down Mexico way.

Another active week for Argentines in Mexico.

Estudiantes Tecos (UAG), the small ‘third club’ of Guadalajara, perpetual strugglers, and currently regarded by pretty much everybody as doomed for the drop, get very little media attention; they play their home matches on Friday nights, and for that reason alone remain virtually off the radar.

But it is always a pleasure for this observer to watch an underdog take down one of the higher powers, and that’s what occurred on Friday 10th November, when Estudiantes opened the penultimate round of the Mexican torneo by upsetting a perennially strong Toluca club 4-2 before their small but faithful home supporters. The surprising fight-back victory – which put a serious dent in the Red Devils’ expectation of a liguilla qualification place – was largely the work of two talented Argentines whose lights have remained largely hidden under the proverbial bushel due the club’s lack of success.

Mauro Cejas, the 25-year-old ex-Newell’s Old Boys player who in the past two seasons in Mexico has grown dramatically from boy to man, had an inspirational night, registering a hat trick to lead the comeback win. With this trio, Cejas has now scored seven times on the campaign. And his first of the big evening, as well as the team’s second (that one scored by the debutant Daniel Cisneros), was supplied by fellow Argentine Rubens Sambueza, another excellent player who has toiled in the shadows for this little-regarded club. By the end, even Gustavo Cabral‘s own goal (for Toluca’s second) didn’t matter.

On the following day Pachuca, working desperately in recent weeks to keep alive their hopes for liguilla classification, overcame Querétaro 2-1 en casa, a Damián Manso corner providing the opener for Darío Cvitanich, and later, after the Gallos Blancos had levelled, Cvitanich, capitalizing on another wicked corner kick from the marvelous Manso, notched the winner in the 61st minute – his ninth goal of a very busy campaign (he missed he first month of play, but since then his scoring pace has been the most torrid in the Liga Mexicana).

Elsewhere, in Chiapas, Jaguares, another club fighting for qualification, grabbed vital points by over coming visiting Atlas of Guadalajara, 2-1; the visitors made it difficult, however, with a 61st minute score made by Alfredo Chango Moreno for another stalwart veteran Argentine, Fabricio Fuentes.

On the same day, América, perhaps inspired by stinging remarks directed toward the press by Daniel Rolfi Montenegro – who accused the media of disrespecting the Águilas by concentrating on their failures and writing-off their successes as the result of mere good luck – came up happy by qualifying for the liguilla and next year’s Copa Libertadores in one fell swoop, with an away win over Atlante. The only goal of the day came in the 60th minute from Vicente Matías El Toro Vuoso, his eighth of a season that is taking on the aspect of a battle for redemption on the part of this very large and lately vastly underachieving club.