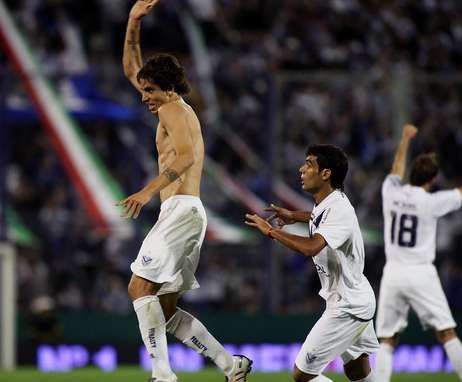 Quilmes won for the first time in the 2010 Torneo Apertura on Sunday, beating Godoy Cruz 2-1 in the only game of the day to go over two goals. Vélez Sarsfield went joint top of the league, on thirty points with Estudiantes de La Plata. They did so by beating Lanús 1-0 with a fantastic shot from Ricardo Álvarez. Elsewhere on Sunday Argentinos Juniors beat San Lorenzo deservedly 1-0, Independiente and Olimpo drew 1-1, and Racing continued an impressive campaign with a 2-0 win away to Newell’s Old Boys. Only the superclásico remains in this round, and there’s a preview of that presented by yours truly over on the first ever Hand Of Pod podcast now. As for Sunday’s goals? You can see them all right here.

You can follow the daily ins and outs during the 2010 Apertura, as well Argentine clubs in the Copa Sudamericana, the country’s vast foreign legion and the latest news from the selección during the 2010-2011 season direct from Buenos Aires with HEGS on Twitter. If you’ve not signed up yet you can do so here. You can also join the official HEGS Facebook group, to keep up to date with the latest posts on the blog and discuss things with other fans. You’ll find it here. Also remember to bookmark Hand Of Pod, which as of tomorrow evening (gremlins permitting) will be home to a brand new Argentine football podcast.