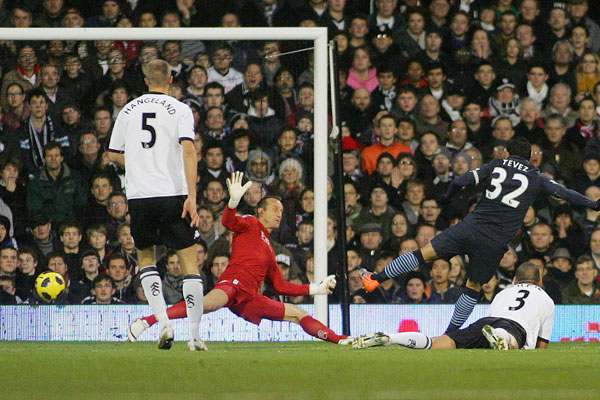 A doubly pleasing Argentine performance for Manchester City on Saturday was matched by a veritable flood of goals from Argentines in Europe’s major leagues. As well as Carlos Tevez and Pablo Zabaleta both scoring for City, there were also goals from Lionel Messi, Gonzalo Higuaín and others. As ever, read on for the best of them, from me and our correspondents…

In the Premier League, Manchester City visited their former manager Mark Hughes at Fulham, and three Argentine goals proved the difference, with the away side running out 4-1 winners. With Diego Maradona watching from the stands, Carlos Tevez opened the scoring after only five minutes, and later added a lovely taco for his second, as well as setting up Toure Yaya for City’s other goal, their third. Pablo Zabaleta, in between, scored a screamer from outside the box.

In France’s Ligue Un, Lisandro López scored again for Lyon to put the seal on a 3-1 away win over Lens.

In Serie A on Saturday Nicolás Burdisso was shown a red card near the end of Roma’s 2-0 win over Udinese, and on Sunday Maxi López was sent off for Cagliari, who all the same beat Bari 1-0 at home. Internazionale used Javier Zanetti and Esteban Cambiasso (the latter back from injury) and stumbled to a 2-1 loss away to Chievo Verona, and Javier Pastore featured for Palermo in a 2-1 away win over Cesena. Hernán Crespo was the only Argentine goalscorer of the weekend in Italy though, bagging Parma’s goal in their 1-1 draw at home to Lazio, a match in which Mauro Zárate was a central figure as ever for the visitors, and took the corner they equalised from.

Ben Shave is the author of Cahiers Du Sport and is filling us in on Portugal.

This weekend saw the 4th Round of the Taça de Portugal take place, and with Benfica’s plum tie against Braga postponed due to a NATO conference in Lisbon (don’t ask), Porto’s Fernando Belluschi was the sole representative for Argentina across the thirteen matches played. The number seven was one of the better performers in blue and white, as they endured a largely frustrating evening at Moreirense. The breakthrough didn’t come until the seventy-fifth minute, and it was initiated by Belluschi’s thunderous right-footed strike, which Roberto tipped onto the bar, only for one-time River Plate forward, the Colombian Radamel Falcao García to pounce and tap home. Marco Torsiglieri was an unused substitute as Sporting also ran out 1-0 winners, at home to Paços de Ferreira.

Tom Clark, whose blog is here, has been keeping a beady eye on Mexico.

Full-on action all the week in the quarter-finals of the Mexican Apertura.

On Wednesday 17th November, torneo superlider Cruz Azul, playing the first leg of the liguilla away to Pumas (UNAM), came back from a 1-0 deficit on two stunning efforts by the ineffable Christian Chaco Giménez. El Chaco brought the cementeros back from a 1-0 deficit with a wicked 34th minute free kick that before ending up in the net brushed ever so slightly against the shirt of his teammate Horacio Cervantes, who was given credit for the goal. Then in the 74th minute Chaco struck again, this time with a phenomenal golazo, struck on the full volley from well outside the area. One of the prettiest liguilla goals scored by anybody, in many a year.

In the first leg of another quarter-final tie on Thursday the 17th, Monterrey, playing away to Pachuca, escaped with a 1-1 draw enabled by an Argentine connection: Nery Cardozo supplying Jose Maria Basanta in the 57th minute.

Come the weekend, and on Saturday the 20th a proud Cruz Azul club that for three months had been playing the best football in Mexico was struck again by the dread ‘curse of the quarter-finals’, sacrificing their seemingly safe advantage and succumbing in full sight of their desolated aficionados to Pumas (UNAM), 2-0. Pumas’ main man on the day was the rampaging and uncontainable Martín Bravo, who notched a first goal with a stirring golazo, was narrowly denied a second, and then drew a red card (from Horacio Cervantes), reducing the homeside to ten men and thus paving the way for Pumas’ second goal that secured a 3-2 aggregate triumph, and a semifinal berth.

On the same day América, playing at home, confidently dispatched San Luis 4-1 to move smoothly into the semis. The late goal (81st minute) that killed off this tie came from Vicente Matías El Toro Vuoso.

On Sunday the 21st the quarter-finals concluded with two of the higher-classified clubs holding service.

Pachuca battled all the way in Monterrey but the home side, aided by a 57th minute Nery Cardozo goal, hung on for a 3-3 draw that gave them the edge in the global (4-4, with superior classification the decider). In the last quarter-final, Santos also held on at home, grabbing a late goal that ensured victory over Jaguares de Chiapas on a 2-1 aggregate.

And so it’s on to the semis this week.

David Cartlidge, a contributor to Spanish Football Info, gives us the lowdown on Spain.

The main headline on Saturday night was the astonishing 8 goal hammering Almería received at the hands of Barcelona, and of course what Catalan goal-fest would be complete without Lionel Messi weighing in with his share – and that share happened to be a hat-trick. His first came from a neat one-two with David Villa, whose neat back flick found Messi who drilled a low shot into the bottom corner of the net. The 2nd came after his close range effort was blocked by goalkeeper Diego López, but he reacted well to poke home. The hat-trick was completed when he again capitalised on López’s inability to hold the ball, this time with a simple finish. He also managed to assist Bojan with a cut back pass, and helped the same team-mate to a brace with another simple assist. Javier Mascherano also featured for Barcelona.

Messi vs Almería (note: if Eurodance isn’t your thing, you probably want to hit ‘mute’ before playing this video)

Real Madrid also helped themselves to a few goals on Saturday night, as they beat Athletic Bilbao 5-1. The opening goal was very much made in Argentina, as Angel Di María’s nifty turn on the edge of the area was followed by a pass which found Gonzalo Higuaín who slotted home. The same combination teamed up on an incisive breakaway, which Cristiano Ronaldo finished off. Di María won a penalty later in the game, as he was pushed over while in full flight.

Diego Colotto always makes his presence felt at set pieces while playing for Deportivo de La Coruña, and he found a little end product Sunday evening as his team beat Malaga 3-0. The defender scored a well placed and powerful header without even jumping from a corner to double Deportivo’s advantage. He also made some very timely interventions with his head at the back, in an all-round solid performance.

I wrote a week ago of the Uruguayan-Argentine partnership of Diego Forlán and Sergio Agüero returning to form, and that continued into this weekend as they combined to help Atlético de Madrid come from behind to beat Real Sociedad 2-4. Agüero plucked a pass from José Antonio Reyes out of the sky, before driving towards goal and pulling it back to Forlán who finished well. Agüero helped himself to a goal soon after, as he tapped home from close range to help his side take the lead. The ex-Independiente man then bagged a brace as he punished some poor defending to smash in his side’s third.

Nicolás Bertolo continued his goal scoring streak (3 league games in a row to be exact) with a smart piece of play on Monday evening, as his Real Zaragoza side drew 1-1 with Getafe. A little bit of rash keeping from Jordi Codina saw Bertolo take full advantage, as he snuck in to steal possession and loop the ball in from 25 yards on an angle – open goal yes, but a very nice finish. His Zaragoza team mate and countryman  Leo Ponzio was sent off in the game via two yellow cards, the first for dissent then the second for a clumsy foul.

You can follow the daily ins and outs during the 2010 Apertura, as well Argentine clubs in the Copa Sudamericana, the country’s vast foreign legion and the latest news from the selección during the 2010-2011 season direct from Buenos Aires with HEGS on Twitter. If you’ve not signed up yet you can do so here. You can also join the official HEGS Facebook group, to keep up to date with the latest posts on the blog and discuss things with other fans. You’ll find it here. Also remember to bookmark Hand Of Pod, our home to a brand new Argentine football podcast (or subscribe to it on iTunes here)