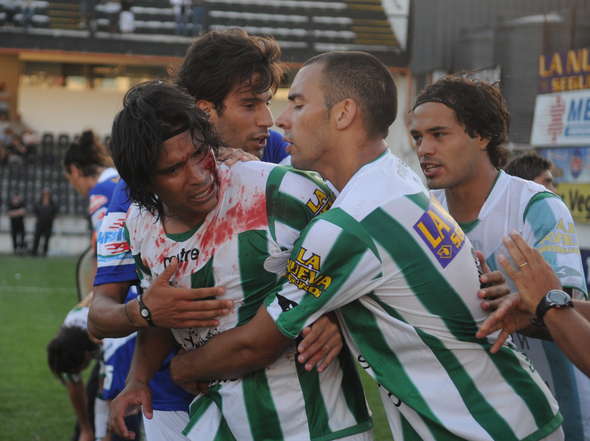 Racing easily saw off Gimnasia La Plata with some very nice football on Friday evening, but the big story was in Floresta, where All Boys beat Banfield 2-1 and, in the last action of the match, visiting striker Rubén Ramírez challenged All Boys’ Hugo Barrientos a little too strongly for the latter’s taste, and the Albo midfielder responded with an elbow the face which left Ramírez covered in blood. An AFA sanction could well be on the way. You can see all the goals, as well as those from Olimpo’s and Arsenal de Sarandí’s 1-1 draw on Wednesday, right here.

You can follow the daily ins and outs during the 2010 Apertura, as well Argentine clubs in the Copa Sudamericana, the country’s vast foreign legion and the latest news from the selección during the 2010-2011 season direct from Buenos Aires with HEGS on Twitter. If you’ve not signed up yet you can do so here. You can also join the official HEGS Facebook group, to keep up to date with the latest posts on the blog and discuss things with other fans. You’ll find it here. Also remember to bookmark Hand Of Pod, our home to a brand new Argentine football podcast (or subscribe to it on iTunes here)

One thought on “Racing beat Gimnasia, and All Boys win again”