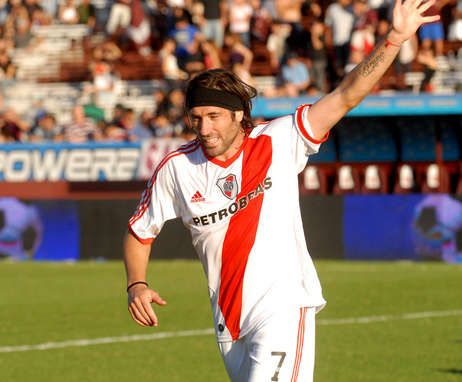 There were an awful lot of ones on the scoreboards of Argentina’s top flight on Monday as the 2010 Torneo Apertura drew to a close, but River Plate, at least, ended a difficult year on a high note with a 4-1 away tonking of Lanús. After opening his first team account last week, rising star Erik Lamela got another, and Mariano Pavone grabbed two for River. Martín Palermo’s second goal in professional football was scored back when dinosaurs walked the earth, seemingly; on Monday he scored the 300th goal of his career in Boca Juniors’ 1-1 draw at home to Gimnasia. Those goals, and the rest of Monday’s, along with all the final round’s scores and scorers, are right here.

The final Apertura standings (pending Independiente vs Tigre, which will be played somet time in 2011), Copa Libertadores 2011 qualification table and the current Promedio standings – in which River Plate are currently safe! – are right here on the Tables page. Keep your eyes on HEGS for some of the main stories to look out for as the Argentine league now breaks up for the summer, and some of my thoughts on the Apertura as a whole later in the week.

You can follow the daily ins and outs during the summer break, as well Argentina’s performances in the Sudamericano Sub 20 in January, the country’s vast foreign legion and the latest news from the selección during the 2010-2011 season direct from Buenos Aires with HEGS on Twitter. If you’ve not signed up yet you can do so here. You can also join the official HEGS Facebook group, to keep up to date with the latest posts on the blog and discuss things with other fans. You’ll find it here. Also remember to bookmark Hand Of Pod, our home to a brand new Argentine football podcast (or subscribe to it on iTunes here)