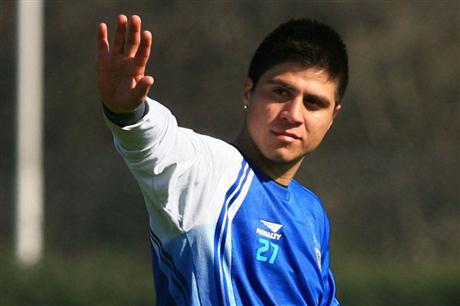 With little going on during the summer break, HEGS has been quiet as I’ve been earning some spending money whilst on my visit to England, and seeing friends. Off the pitch though, some transfer dealing has been happening, and some of it at least is nearing possible conclusions. Rogelio Funes Mori’s transfer to Benfica collapsed on Monday, but whilst River Plate fans despair, there’s hope for sympathisers of Racing, who are edging closer to securing Darío Cvitanich’s signature. And Jonathan Cristaldo, one of Vélez’s high-scoring trio during the Apertura, looks like he’s on his way to Ukraine. As well as this, Walter Perazzo has announced the Argentina squad he’ll take to Peru to contest the South American Under 20 title, and qualification for the World Youth Cup in Colombia and the London 2012 Olympic Football Tournament.

Over the weekend Funes Mori’s agent had claimed that the transfer to Benfica was ‘90% agreed’, but it was that last ten percent that proved decisive. Kia Joorabchian, who was representing the player in Portugal, was sticking to River’s valuation of the player and was eventually told by Benfica president Luis Felipe Vieira, ‘sorry, but this is like a reality show… you’re all mad!’ The division of various transfer payments seems to have been the sticking point; Funes Mori’s family own 20% of the player’s registration, and reportedly wanted what Benfica felt was too high a price for their share.

When another man, Lucas Bernasconi – who according to Funes Mori, but not to others close to him, is the player’s agent – entered the scene, and asked to speak to Vieira, Benfica lost patience. At least, that’s the version Joorabchian and his men told of the story. Bernasconi, for his part, denies having been the problem. Whatever the reason, Benfica will now be looking to spend €8.5 million on a striker from another club, and Daniel Passarella’s plan to finance some summer transfer spending for River will have to be worked out another way.

One way the money might come in would be with the transfer of Diego Buonanotte. Club América de México were linked with him recently, but his prospects of moving north seem to have passed. Universidad Católica in Chile are known to be interested, but it seems that Passarella will be looking to get as much as possible for either Buonanotte or Rogelio Funes Mori at some point before the end of the holiday.

In the biggest-value transfer of the Argentine window so far, Jonathan Cristaldo is moving from Vélez to Metallist Kharkiv of Ukraine for €5 million in exchange for 80% of the player’s registration. Cristaldo impressed as Vélez ran Estudiantes close for the 2010 Apertura title, scoring not a few goals, but many of his contributions were from the bench and he explained to the club’s directors that he wanted a change of club in order to try and secure more playing time. The 21-year-old will travel to Ukraine later in the week to put pen to paper on the contract for his first crack at European football.

Racing, meanwhile, are enjoying January without having to consider any relegation sums for the first time in a long while. They’re looking to bring reinforcements in, but as club manager Miguel Ángel Russo puts it, ‘in order to finish as high up the table as possible,’ rather than to arm themselves for a relegation battle. The same group of backers who were behind the move which brought Giovanni Moreno to the Avellaneda club are now tabling a bid of around US$3.5 million to sign former Banfield striker Cvitanich, who’s now playing for Pachuca of Mexico, with whom he won the 2010 CONCACAF Champions League. The transfer will be made still easier if, as looks not unlikely, Claudio Bieler – brought in last year from Liga de Quito – moves on to Newell’s Old Boys after an unhappy spell with La Academia.

And finally, Walter Perazzo’s squad for the 2010 Sudamericano Sub 20, which acts as the qualifying stage for the 2012 London Olympics and the World Youth Cup in Colombia later this year. Here it is, complete with squad numbers:

‘But Sam,’ I hear you cry, ‘is there a podcast discussing some (but not all) of these under-20 players, the majority of whom I the reader have probably not heard of?’ Why yes, dear reader, there is. You’ll find it right here, in the fourth episode of Hand Of Pod.

One thought on “Argentina’s Under 20 squad announced, and the transfer latest”