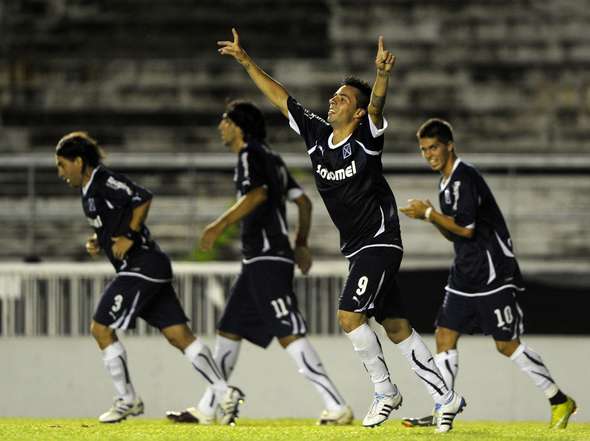 Tuesday night saw competitive football finally begin for Argentina’s clubs, even though the interminably pointless and boring Torneos De Verano (which HEGS readers may have noticed aren’t being covered here this year, because I’m fed up with them) haven’t yet ended. Independiente returned to the Copa Libertadores with a 2-0 win over Deportivo Quito in the first leg of their qualifier, and you’ll find the goals here. River Plate and Boca Juniors, meanwhile, have experienced serious injury blows to their pre-season preparations just a day apart.

On Tuesday River goalkeeper Juan Pablo Carrizo fell awkwardly and had to be taken to hospital. After some examinations it was confirmed that he’d damaged his ankle ligaments in a manner which required surgery in order to avoid any future problems. As such, he’s likely to be out of first-team action for around two to three months. It’s a big blow to River, for whom Carrizo has perhaps a little more influence on the defence even than most goalkeepers should have. They’re not as reliant on him as they were when they won the 2008 Torneo Clausura – when he pretty much formed their entire defence – but in the battle against relegation, losing their first-choice goalkeeper for the start of the season may see some ambitions of chasing the title scaled back a little. When Carrizo was out of the side previously, Daniel Vega was the man charged with replacing him, but whether J.J. López will prefer Leandro Chichizola or Gonzalo Marinelli, we’ll have to wait and see.

At Boca’s pre-season camp on Wednesday morning, meanwhile, the news wasn’t quite as bad but it won’t have been what new manager Julio César Falcioni wanted, all the same. Christian Cellay, who had an injury-ravaged time during the Torneo Apertura, had to drop out of training after feeling a twinge which he couldn’t shake off in one of his legs. Cellay was seen as Falcioni’s first choice for the right back berth this year, so it’s an annoyance for the boss, but at least in Clemente Rodríguez he knows he’s got an able replacement, with Luciano Monzón thus coming in at left back. In slightly better news for the Xeneize, Sebastián Battaglia and – wait for it! – Juan Román Riquelme are both doing light training with a view to reintegrating themselves into the squad – in Riquelme’s case after a long time out – soon.

Independiente’s 2-0 win over Deportivo Quito in the first leg of their Copa Libertadores qualifier stands them in good stead for the high altitude return next Tuesday. Matías Defederico – the new arrival from Corinthians, whose registration was only put through just in time for him to be named in the match squad – got a goal on his debut to open the scoring, and young hotshot Patricio Rodríguez got the second with a close range finish from a poorly defended free kick.

6 thoughts on “Independiente kick off the Copa, & injury issues at River and Boca”