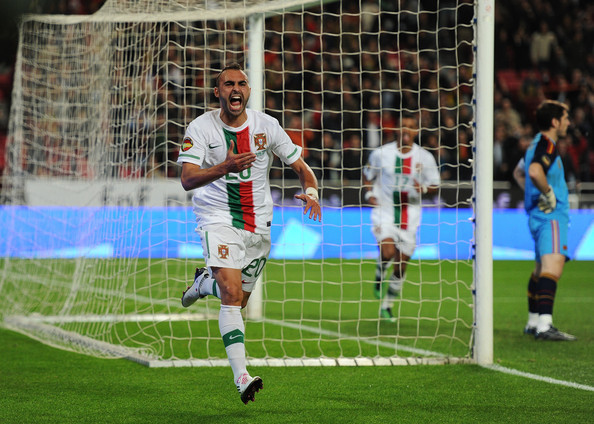 With Argentina taking on Portugal in Geneva on Wednesday afternoon/evening, and the world’s press (and especially, it would seem, the Argentina, Portuguese and Spanish media) pushing the fixture as a battle between Lionel Messi and Cristiano Ronaldo, I thought it a good idea to show that there are going to be other talents on display, as well. Regular Argentines Abroad contributor and fellow In Bed With Maradona writer Ben Shave – whose excellent Portuguese football blog Cahiers Du Sport can be found here – has kindly agreed to furnish HEGS readers with a guide to the Portuguese national team in preparation for the match. Just read on.

Portugal travel to Geneva for Wednesday’s friendly in remarkably fine fettle for a side who just five months ago drew 4-4 at home with Cyprus in a fittingly unedifying crescendo to the chaotic Carlos Queiroz era. The former Manchester United assistant coach played no part in that shambolic performance, having been handed a six-month ban by Portugal’s anti-doping agency, who ruled that he had disrupted the work of drugs testers at the Selecção’s pre-World Cup training camp. This was on top of a one-month ban already issued by the Federação Portuguesa de Futebol for the same incident. The whole scandal rapidly descended into farce of the highest order, with Queiroz – still the official coach at the time – forced into purchasing his own ticket for the aforementioned match in Guimarães.

That evening, and the 1-0 loss at Norway which followed shortly after, were the closing stanzas of an uncomfortable period for the Selecção, which began with the retirement(s) of Portugal’s so-called ‘Golden Generation’ (Rui Costa, Luis Figo, and, er, Pauleta to name but a few), was augmented by the departure of Luiz Felipe Scolari, and bore fruit with a listless exit from the World Cup, and a performance against Spain which was largely devoid of the attacking flair and high-tempo style that had become synonymous with the team during the 1990s and 2000s. Given that Portugal is a nation of just 11 million, the history of the Selecção can reasonably be described as one of over-achievement, and the reconciliation of both the public and footballing establishment with this fact has been the dominant narrative of the post-South Africa landscape.

Under Queiroz, the side had been lacking in direction and structure, with too many chiefs and not enough indians. Whilst the charisma of Scolari ensured that the public empathised with and felt close to the Selecção, support during the World Cup was noticeably reduced, and the re-emergence of the debate surrounding Brazilian-born players (Pepe, Deco and Liédson all featured prominently during the tournament) reflected this shift in perception.

Given this atmosphere of uncertainty and apathy (the draw with Cyprus attracted a paltry 10,000 spectators), the performances since the departure of Queiroz and the appointment of Paulo Bento as manager have been something of a revelation. Bento, an unfussy defensive midfielder during his playing days, has managed to both reinvigorate the playing squad and begin the process of repairing the damaged relations between press, public, and national side. His open attitude towards media engagement in particular has been a marked departure from the days of Queiroz and even Scolari, who famously refused to discuss players he hadn’t selected. Bento’s question-and-answer sessions have been relaxed and informal, and he’s come across as amenable and receptive.

This conciliatory manner, honed during a five-year spell at the helm of the notoriously unstable Sporting Clube de Portugal, is also reflected on the pitch. Bento has dispensed with the tactical tinkering of Queiroz’s latter time in charge, and returned to the 4-3-3 formation that most Portuguese players begin their youth careers playing. The headline of his tenure so far was undoubtedly the 4-0 victory over Spain at the Estádio da Luz back in November, but whilst the 2012 European Championship qualification victories over Denmark and Iceland were more prosaic in nature, they were equally important, with little desire for another flirtation with premature elimination. All three matches were also characterised by a continuity that has swiftly emerged as a hallmark of Bento’s Selecção.

The defence – undoubtedly the most impressive aspect of Portugal’s World Cup campaign – is largely unchanged. Eduardo retains the number 1 spot, although the recent form of Sporting’s Rui Patrício could see the Genoa man’s place come under threat. The anchor of the back four is Ricardo Carvalho who, having swapped the physical demands of the Premier League for the less taxing environs of La Liga, appears to have rejuvenated a career that looked as if it may have been derailed by injury. He is likely to be partnered by Bruno Alves, with Pepe absent from the squad through injury. Alves has lost the starting berth that he enjoyed under Queiroz, with Bento prioritising the partnership enjoyed by Carvalho and Pepe at Real Madrid. Given that Alves has not played a competitive match for Zenit St Petersburg since mid-December, Bento may choose to hand a start to F.C. Porto’s Rolando, who has been in impressive form this season.

The two full back positions will be drawn from João Pereira of Sporting, José Bosingwa of Chelsea and Benfica’s Fábio Coentrão. The latter is a shoo-in at left-back, having enjoyed a stellar eighteen months for both club and country. The consensus amongst the Portuguese press corps is that a move to Real Madrid in the summer transfer window is all but inevitable, and it has become increasingly clear of late that the youngster has begun to outgrow the Portuguese Liga. Pereira currently has the upper hand in the tussle for the right-back spot, although Bosingwa’s gradual re-integration into the Chelsea first team may alter this state of affairs.

It is in midfield where Bento has implemented the most significant reforms since the World Cup. With Pepe dropping back to central defence, and the international retirements of Deco, Tiago and Simão, doors have been opened for both João Moutinho and Carlos Martins. The elevation of Moutinho is no surprise; he was captain of Bento’s Sporting, and has enjoyed a fine season at Porto. Indeed, the form of the diminutive midfielder has been so outstanding that the decision by Queiroz to omit him from the World Cup looks ever more questionable. However, the rise of Benfica’s Carlos Martins has come as something of a surprise. A product of Sporting’s youth system, he had a public falling-out with Bento in 2006, and was shipped off to Recreativo de Huelva in Spain. A move to Sporting’s eternal rivals has kick-started a career that looked to be stagnating, and the fiery Martins appears to have made his peace with Bento. Nevertheless, Martins’ recent loss of his place to Eduardo Salvio leaves Bento with a selection quandary, and it will be interesting to see if he opts for a player who is getting regular games at club level, such as Paulo Machado at Toulouse, or Miguel Veloso, currently warming the bench at Genoa but another former charge at Sporting.

The midfield trio will be completed by Raul Meireles, who under Bento has been handed the central anchoring role. Although a nominally defensive position, Meireles has been a major factor in the fluidity which was so notable against Spain. Having recently discovered his best form at Liverpool, the former Porto man looks set to become the fulcrum of Bento’s midfield.

Up front, the majority of Bento’s considerations begin and end with captain and creative linchpin, Cristiano Ronaldo. The Real Madrid forward has had a difficult relationship with the national side, and his ineffective displays were amongst those which came in for the most severe criticism following the World Cup. Despite that, Ronaldo remains the undisputed star of this team. It is perhaps easy to become blasé about his achievements – particularly when they are compared with those of Lionel Messi, as seems to be the fashion these days – but the Sporting youth product is a fantastically gifted and driven player, and whilst it would be an exaggeration to state that his performances determine the fortunes of Portugal, he provides the side with a fervent momentum that can manifest itself in some quite breathtaking football. Against Spain, Ronaldo was clearly desperate to deliver against his Real Madrid colleagues, and (although he would probably not admit this) to do so at the home of Benfica seemed to motivate him even more. It was a display of remarkable intensity and commitment, rightly hailed by Bento (who played alongside Ronaldo at Sporting in 2002/03) as an example of what he was looking for from his players.

On the opposite flank, Ronaldo’s former Manchester United team-mate Nani has also emerged as a key figure for Portugal. It was his three-minute brace against Denmark that began the Bento era, and whilst the return of Ricardo Quaresma to the squad provides additional competition, it is unlikely that the Harry Potter of Portuguese football – who appears to have found his niche at Beşiktaş – will dislodge the Manchester United man in his current form. The centre forward position (traditionally a troublesome one for Portugal) will be filled by either Hélder Postiga or Hugo Almeida. Neither are particularly prolific goalscorers, although Almeida is probably the more natural finisher of the two.

In summation, Argentina face Portugal during a time of transition and promise for the Selecção, and if all concerned perform to their potential, we should be in for a fine evenings’ entertainment. Just don’t call it Ronaldo vs. Messi.

You can follow the ins and outs during the build up to the 2011 Torneo Clausura, as well Argentina’s performances in the Sudamericano Sub 20, the country’s vast foreign legion and the latest news from the selección during the 2010-2011 season direct from Buenos Aires with HEGS on Twitter. If you’ve not signed up yet you can do so here. You can also join the official HEGS Facebook group, to keep up to date with the latest posts on the blog and discuss things with other fans. You’ll find it here. Also remember to bookmark Hand Of Pod, our home to a brand new Argentine football podcast (or subscribe to it on iTunes here)