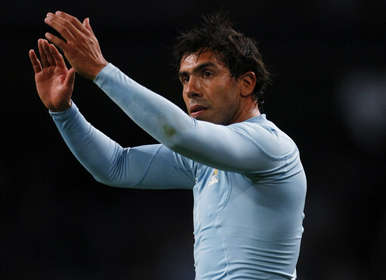 This week saw confirmation on Tuesday that two Argentines – Carlos Tevez and Pablo Zabaleta – will feature in next season’s European Cup; at least assuming Tevez stays with Manchester City, who beat Tottenham Hotspur 1-0 to confirm a top four place in England’s Premier League. Alejandro Faurlín, of course, will be joining them in the top flight after his Queens Park Rangers side were promoted in spite of major controversy over the nature of his signing. In Spain, Sergio Agüero finally failed to score, whilst in Italy an Argentine double act kept Diego Simeone’s Catania side in Serie A for another season. All this and more is right here in your weekly Argentines Abroad dose.

In England, Saturday saw Newcastle United confirm their Premier League safety for next season in spite of Fabricio Coloccini slipping up – at the end of a generally impressive season – to allow Lee Bowyer to pull one back for visitors Birmingham City, making it 2-1 on the stroke of half time. With Jonás Gutiérrez also featuring, Newcastle had a relaxed second half though, and 2-1 ended up being the final score. Saturday also saw Manchester City lose 2-1 away to Everton, but on Tuesday they were in action again (due to the fact that they play the FA Cup final this Saturday), and won 1-0 with a Peter Crouch own goal away to Tottenham Hotspur to confirm fourth place and European Cup participation next season. Pablo Zabaleta will surely still be there, and the qualification might just convince Tevez to remain at Eastlands for coming term as well.

On Monday evening, Maxi Rodríguez scored his second hat trick in his last three matches. Where on earth this scoring streak has come from is beyond most observers, but Liverpool fans certainly won’t be comnplaining; Maxi was man of the match in the 5-2 away win over Fulham. It’s a result that moves Liverpool into fifth, and thus puts them in the driver’s seat to qualify for the Europa League next season, two points ahead of Spurs in sixth, with two matches remaining.

Perhaps the biggest Argentine news in England came from the Championship (England’s second division), though, as Alejandro Faurlín and his Queens Park Rangers side were promoted to the Premier League. After QPR had stupidly been dishonest about who owned Faurlín’s registration when he signed for them in 2009 from B Nacional side Instituto de Córdoba. The Football Association dealt with the case after the Football League had passed it on to them, and though QPR were found guilty on two of the seven charges put to them, a fine was seen as enough of a punishment, and without a points deduction QPR were promoted as champions of the second flight in spite of a final day 2-1 defeat at home to Leeds United.

In France’s Ligue Un, St Etienne got a 1-0 win away to already relegated Arles, through a penalty from former Huracán midfielder Alejandro Alonso. The big game of the weekend for Argentines goals, though, was between Lyon and Marseille. Former Porto teammates Lisandro López and Lucho González both got on the scoresheet for different sides. Licha opened the scoring for Lyon with a 25th minute penalty, before another Argentine, César Chelo Delgado, doubled the lead. Just a minute after that, Lucho pulled one back, stabbing in from close range, but although his Marseille side equalised a few minutes later, they were eventually beaten 3-2.

On that note, it’s over to our correspondents. As usual, click the names for their Twitter profiles, whilst those who have blogs are also mentioned.

Nick O’Doherty is here to let us know what’s going on in Italy’s Serie A.

Nicolas Burdisso completed the 90 minutes for Roma as they drew 0-0 at home with AC Milan, meaning the Rossoneri won the league for the first time since 2004. By and large it was a largely uneventful match as Roma’s Champions League hopes took a blow. They are in fifth place with 2 games remaining, currently 2 points behind Udinese with a much worse goal difference.

Catania secured their first away win of the season with a 2-1 win at Brescia. The goals came from Argentines Matías Silvestre and Gonzalo Bergessio who both scored last weekend. The result means that Diego Simeone’s side are safe in Serie A for another season while Brescia have been relegated.

Mauro Zárate missed a penalty for Lazio in a crucial game in the race for Champions League qualification with Udinese which the home side won 2-1 thanks to a brace from Antonio Di Natale. Zárate was a threat for Lazio throughout and provided the assist for Libor Kozak’s consolation goal, yet his penalty miss was the defining moment in the game.

Esteban Cambiasso scored for Inter Milan with a header from a Samuel Eto’o freekick in their 3-1 home win over Fiorentina. Inter are challenging Napoli for second place after Milan already won the league while Fiorentina are not playing for anything.

Tom Clark, whose blog is here, is as ever filling us in on the action from Mexico.

The quarter-finals of the Mexican liguilla saw Cruz Azul, a club notoriously cursed – and/or underperforming – in these late stages of the season, rise this time to the occasion. The Cementeros rode the gallant shoulders of the great Christian Chaco Giménez, a dominant figure all through the Clausura, to a two-leg victory over Atlante. All the victorious side’s goals came in the first leg and proved, not too surprisingly, to be Chaco’s. His memorable and phenomenal golazo in the 18th minute might have been the prettiest as well as one of the most important goals of the Mexican season. He struck again in the 48th minute, and though he later proved he is human after all, by having a penalty saved, nothing more was needed to put Cruz Azul – after a cagey scoreless draw in the 7th May return – through to the semi-finals. Take a moment to check out Chaco’s incomparable genius.

The other Argentine-tinted goal of the quarter-finals came from Vicente Matías Vuoso in the 65th minute of América’s 3-2 away leg defeat at Morelia. The Monarcas had already insulted the much-abused pride of Mexico’s largest and richest club with a 2-0 win in the first leg at the Azteca in the capital, and so the Águilas, thus going down 5-2 in the global count, and having earlier in the week been eliminated from the Copa Libertadores, ended another campaign with nothing in the trophy case to show for their travails.

Ben Shave, author of Cahiers Du Sport, is giving us the lowdown on the Portuguese Liga.

There was plenty of Argentine involvement in the penultimate round of the Liga season. After being dumped out of the Europa League by Braga in midweek, Benfica travelled to Rio Ave licking their wounds. Franco Jara and Nico Gaitán were the only Albiceleste starters, with Pablo Aimar (linked with a move to Russian side Anzhi on Monday) absent through injury. In his absence, it was Gaitán who took the creative baton, delivering another fine display after a quiet outing last Thursday. Benfica ran out 2-1 winners, with the former Boca man and Jara amongst the standout performers.

Sporting hosted relegation strugglers Setúbal at the Alvalade, with Marco Torsiglieri the sole Argentine starter. The Lions are still tussling with Braga for 3rd place, a conflict not helped by a 1-0 loss. Torsiglieri was somewhat flat-footed for the goal, allowing Jaílson to head home unmarked. Sporting are planning a major clear-out over the summer, and Torsiglieri may yet find himself out in the cold – though he has in my opinion done just enough to earn himself a place in the squad next season.

There were a pair of Argentine cameos for Porto in their 3-3 draw at home to Paços. Fernando Belluschi made his return from injury, replacing João Moutinho, whilst Mariano González was also given a run-out. The latter is widely expected to depart the Dragão this summer, with a return to Racing perhaps on the cards.

David Cartlidge, a contributor to Spanish Football Info, has been watching the Spanish top flight, so we don’t have to.

It was a quiet weekend in Spain in terms of Argentine action, with several players being rested while the others who did feature had little happening in terms of real incident.

Saturday saw Getafe beat Almería 2-0. The home side featured Daniel Cata Díaz, who put in a strong, no-nonsense performance as usual while teammate and goalkeeper Oscar Ustari claimed a clean sheet by pulling off several key saves. Almería were relegated by the result too, and Leo Ulloa probably had his side’s best chance after coming on as a late substitute – but the effort hit the post. Diego Colotto featured for Deportivo La Coruña, as they earned a point against Sporting Gijón. Colotto played at centre back making several crucial interceptions, and headed clearances.

Valencia managed a solid 3-0 victory over Real Sociedad, in which Éver Banega got in a full 90 minutes – to my surprise. Although he wasn’t wasteful with his passing, he simply couldn’t get into the game in the same impressive manner as he has over recent weeks. Valencia operated a 4-4-2 which seems to nullify his abilities, with too much focus perhaps on defensive duties rather than causing problems from deep with attacking intentions. Hopefully the 4-4-2 doesn’t stay too long…

Sergio Agüero played for Atletico Madrid as they lost 0-3 to Málaga. Kun wasn’t at his best, and neither were his teammates as is obvious by the score line – this also marked an end to the wonderful scoring streak he’s been on. Málaga had Martín Demichelis in their starting line-up, and he’s played well in recent weeks which has coincided with the team from the south coast of Spain hitting a decent run of form. ‘Willy’ Caballero was Málaga’s goalkeeper and he had little to do other than to deal with long-range efforts.

Federico Fazio was at centre back for Sevilla as they suffered a heavy 2-6 defeat against Real Madrid, and had a very poor game. The sheer pace and movement of Madrid’s attackers was too much for him while his marking was redundant. Far too often Sevilla were caught playing too far up the pitch, making it easy for Cristiano Ronaldo & Co. to get through on goal. None of Madrid’s Argentine contingent featured, with Gonzalo Higuaín and Ezequiel Garay staying on the bench.

Barcelona were comfortable as they defeated city rivals Espanyol 2-0, with both Lionel Messi and Javier Mascherano featuring. Messi was rather subdued, perhaps playing within himself after several clásicos and with a Champions League final upon the horizon. It was quite surprising considering all of this, that he played the full 90; while on the field he made some decent runs, linked up well with the midfield and had a few efforts on goal. Mascherano slotted into central defence, and again looked rather comfortable there with his fair share of interceptions and good positional work.