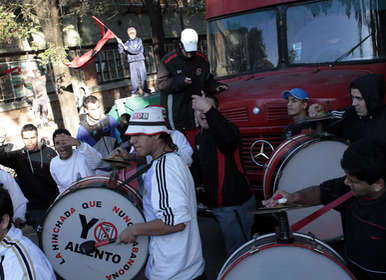 Saturday’s two games in the Torneo Clausura turned into only one game, thanks to a firefight outside Newell’s Old Boys’ ground in Rosario which left one policeman wounded. The gunfight was between members of Newell’s barra brava, and it’s not known at the moment when the match will be rescheduled for – San Lorenzo president Carlos Abdo told the press, ‘we’re not coming to Rosario twice,’ which rather ignores the fact that they’ll presumably have to if they actually want to fulfil their obligations to the AFA’s calendar. In the match which did take place, Banfield brushed All Boys aside 3-1. The goals from that match are right here, as well as those from Friday’s game; a 2-0 win for Arsenal over Olimpo, the ramifications of which are explained too.

This result was the only one of the possible outcomes which could have lifted River Plate out of the relegation playoff places; it dropped Olimpo into their spot, and even if River lose on Sunday at home to Colón, they’ll still finish the weekend out of the playoff spots. Conversely, though, due to Olimpo’s wins being divided by fewer points, it was the only result that took River’s fate out of their own hands. Had the match finished as a draw, or an Olimpo win, River would still be in a playoff spot right now, but three wins in their last three matches would give them guaranteed safety, courtesy of finishing above Arsenal. The aforementioned dividing of Olimpo’s points over fewer games, though, now means River could still have to play the playoff even if they win all their remaining games (if both Olimpo and Arsenal win all their remaining matches).