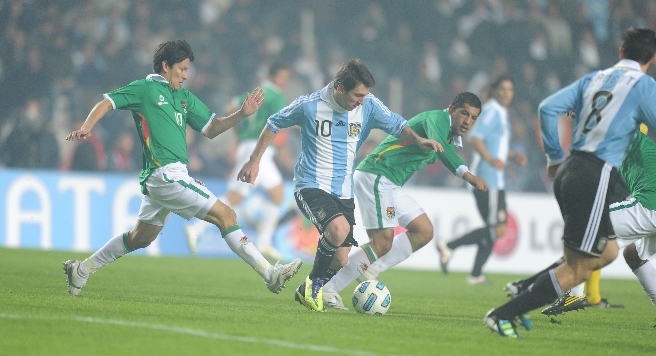 The 43rd Copa América kicked off in La Plata on Friday night, and once again Bolivia were the side charged with playing the hosts on the opening day, as they did in the previous two editions in 2007 and 2004. It ought to have been something of a grudge match for Argentina, since the last time these sides met Bolivia ran out 6-1 winners in La Paz in one of the biggest shocks in the history of the South American World Cup qualifiers, and perhaps the lowest point of Diego Maradona’s reign as manager. If so, though, someone obviously forgot to tell the Argentine players. Bolivia scored only their third ever goal on Argentine soil, and all Argentina could muster in reply was Sergio Agüero’s equaliser a short while after he came off the bench.

In the first half, Argentina’s midfield looked poorly set-up, with Esteban Cambiasso seemingly having been charged with bursting forward from midfield in a more attacking manner than has been the hallmark of Argentina’s central trio under Batista. Previously the Cambiasso-Mascherano-Banega axis has looked well balanced. Against Bolivia, one wondered why Sergio Batista, if he wanted to field a more aggressive midfield, didn’t vary the personnel a little. Cambiasso’s ill-suitedness for the role was illustrated by a spectacular miss in the first half.

Worst of all, though, Carlos Tevez and Ezequiel Lavezzi both had nightmares. Tevez, after battling so publicly to get back into the squad, played with seemingly no interest in his team-mates at all, whilst Lavezzi’s wide play was appalling, especially in the second half, during which he was replaced with the much more effective Agüero. Lionel Messi was struggling on his own, with only Ever Banega looking on the same wavelength.

At half time, Ángel Di María replaced Cambiasso, leaving Mascherano and Banega in the middle alone and, with no target man, effectively going 4-2-4, in a sign that Batista, 45 minutes into the tournament, was getting desperate. A little more patience might not have gone amiss. With too many individualistic players around him, Messi was lost, and a rare moment of collective brilliance – a Di María cross chested down by centre back Nicolás Burdisso for Agüero to superbly volley in – was required for Argentina to equalise after the otherwise decent Banega had failed to clear a backheeled corner and let the ball trickle over the line for Bolivia’s opener two minutes into the second half.

It was a poor and unbalanced performance, but it was also the opening game, and we often see slow starts in opening games of tournaments. It’s not as disastrous a result as the press here already seem to be making out, but it does ensure Argentina will have to improve a lot for the next match, against their main group rivals Colombia in Santa Fe on Wednesday. All the same, the Copa América’s finally here.

I would recommend selecting ‘mute’ on this video before playing. You don’t want to be subjected to the music.

You can follow the latest news from the selección in the buildup to the Copa América direct from Buenos Aires with HEGS on Twitter. If you’ve not signed up yet you can do so here. You can also join the official HEGS Facebook group, to keep up to date with the latest posts on the blog and discuss things with other fans. You’ll find it here. And remember to bookmark Hand Of Pod, our Argentine football podcast, or if you prefer you can subscribe to it on iTunes here.