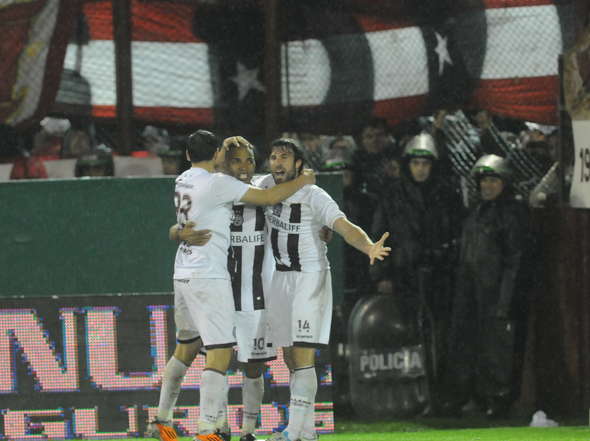 Tuesday evening saw the continuation of the second round the 2011 Torneo Apertura in the Primera División, and the conclusion of the first round of matches in the Nacional B (second round). San Martín de San Juan beat Tigre 2-1, and later in the evening River Plate won their first second division match in over a century 1-0, against Chacarita Juniors. Argentinos Juniors and Independiente drew 0-0, whilst Lanús manager Gabriel Schurrer was given a great birthday present; his side won 1-0 for the second time in this championship, with Diego Valeri coming off the bench in the second half. All the goals from all those matches are right here.

Irony of ironies. Mariano Pavone played well for River Plate last season, but could barely score for the life of him. On the day River made their debut in the Nacional B – partly thanks to chances he failed to put away at times – Pavone came off the bench for his new club Lanús and scored the winning goal with virtually the last touch of the match.

I’d be interested to hear HEGS readers’ opinions on River here. I’m including their goal video this time because of the historical nature of their first non-top flight match in over a century, and because I think there will be enough interest in the event. At the same time, I’m aware that I don’t normally include second division matches in these goal roundups. I’m sure readers will understand why River will receive more attention than anyone else in the Nacional B this season (not only on HEGS, but in the wider media), but I’d be interested to know what the wider consensus is on posting their goal videos regularly, when other second division games are unlikely to get the same treatment. Please reply in the comments.