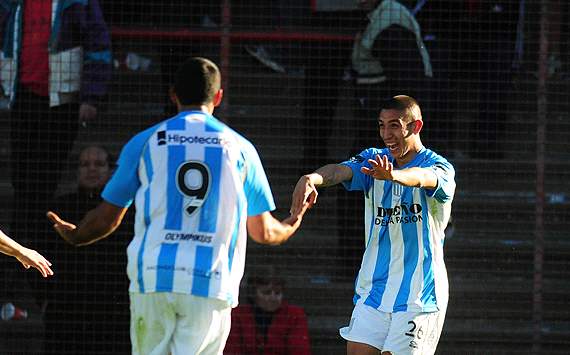 It’s been a fair while since Racing Club fans have seen a new talent come through who can really claim to do justice to their nickname La Academia, ‘The Academy’. Alfio Basile, Ricardo Villa, Claudio López, Lisandro López and Sergio Romero all took their first footballing steps in the blue-and-white half of Avellaneda; but there is a new kid on the block now, in the shape of gangly winger Ricardo Centurión – a youngster who, apart from showing no fear when taking on his marker, is also not afraid to throw a few shapes.

The 19-year-old scored his first ever senior goal in the second game of the Torneo Inicial with a sublime low finish against Argentinos Juniors, but he may come to regret his exuberant celebration in years to come. Sprinting to the corner flag, ‘Ricky’ treated supporters to an unmistakeable repeat of the dance steps made (in)famous in Argentina by boyband the Wachiturros, and in the process doing an uncanny imitation of Carlos Tevez – another star from the nation who cannot resist the rhythm of the music.

While he may resemble Carlitos on the dancefloor, Centurión – already the object of attentions from European clubs such as Napoli and Sporting with fewer than 10 professional appearances under his belt – plays in a style more akin to that of Real Madrid star Ángel Di María when he was making a name for himself at Rosario Central. Blessed with two good feet and limitless pace and energy, Ricky excels with the ball and has the ability to strike the fear of God into opposition full backs as he constantly tries to go past them. Even in the dawn of his career, it is not unusual to see two or three men following the Racing man as he takes the ball on either the right or left flank, and the tackling has been merciless.

Of course, Centurión still has a lot to learn in the senior game. Just like Di María, watching him can be an exercise in frustration as he chooses to hold on to the ball and leave his marker in the dust rather than look for the easy ball. Much can still be chalked down to youthful exuberance, however, and just as Ángel learnt over time that there are ten other men on the pitch wearing the same colour shirt, Ricardo will realise that sometimes, the simplest option can be the best.

The next test for the teenager comes this week when Racing host Colón in the second leg of their Copa Sudamericana clash, having endured a painful 3-1 defeat in the opener to leave their chances in the continental competition hanging by a thread. The Santa Fe side have been one of the most impressive in the season’s opening weeks, and while Youwin place La Academia as narrow favourites Thursday’s meeting could well spell the end of the club’s South American adventure.

For Centurión, however, the Sudamericana campaign surely marks merely the beginning of a career that promises great things even at this early stage. Racing have already responded to the interest from Italy and Portugal with a firm no, but if he can keep up his electrifying form pressure will only increase on him to join Di María in Europe and dance his way across the world’s biggest football stages.

This guest post is by Dan Edwards, one of my fellow Hand Of Pod crew members.

You can follow the latest news from the selección and Argentina’s foreign legion of players, as well as the domestic championship and the ever entertaining/tragic/infuriating capers of Julio Grondona & chums direct from Buenos Aires with HEGS on Twitter. If you’ve not signed up yet you can do so here. You can also join the official HEGS Facebook group, to keep up to date with the latest posts on the blog and discuss things with other fans. You’ll find it here. And remember to bookmark Hand Of Pod, our Argentine football podcast, or if you prefer you can subscribe to it on iTunes here.